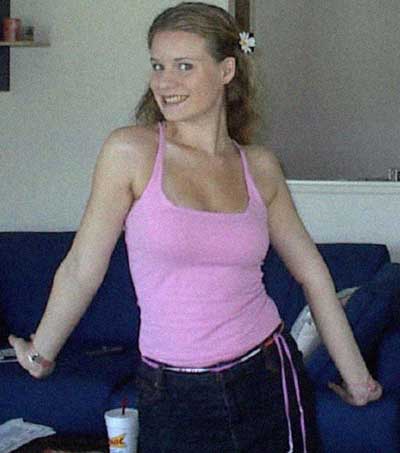 nearly as much as soccer fans hate it when someone who does know soccer puts it into its place.

she floods my inbox with pictures and letters and notes and whines and pleas and loves and hates.

she says this cuban embargo of pictures on my blog but none of her is ridiculous and some may agree with her. im still undecided.

ashley went to the beach yesterday and got a little suntan and came home and took pictures of herself for me and sent them and said, tony, if you love me you will put these on your page.

and i said, ashley, a man can love things and not put them on his blog. its just a blog.

she said, tony. i said, ashley. she said, i mean it. i said, i dont care what you mean. she said, please. i said, nope. she said pretty please.

and we went on and on, but im a sucker for pretty pleases.

she says that she remembers me writing about the kidney stones that i passed but didnt get around to linking to any of the tales, which is sad, because i liked this recollection the best. defiance is my favorite trait, which is one reason i like anna and ashley so much.

for those of you who have given up on the Rabbit, thinking that she has escaped the cage or been skinned and fileted, turns out she was just on a long weekend in vegas complaining of hangovers and being overweight. i havent seen her in a while, but it would take more than a few trips through the buffet line for her to pinch an inch.

speaking of the sexiest female blogger, i have been propositioned by many in competition for this title, and i must say the women are playing this game for keeps.

because one of the contestants is my former newspaper editor, and another is married to a fella that i just saw at lunch, and since another is married to a guy who has skyrocketed to the top of the blogodome nearly overnight– and since all of them are married, i voted for Rabbit cuz she was single and probably could use the virtual pat on the ass.

i vote for Presidents with equal logic.