tiger woods is always trying to impress me, but i keep telling him to save it for the fairway.

your politics are not as all as interesting as your golf game.

“but i would have thought that you would have liked the fact that i told the reporters that private golf clubs should be allowed to be racist or sexist if they wanted,” he said.

tiger. you’re still a sell out. you work for nike.

“well, you worked for microsoft.”

yeah but i wasn’t a millionaire and microsoft doesn’t have sweat shops paying people a few dollars an hour to make the most expensive tennis shoes in the world.

“i thought you were a capitalist?” tiger woods asked me.

i don’t think that’s exploitive. those are adults who think its okay to get paid to get down.

“i swear, tony pierce, you are just never satisfied, are you?”

tiger, if you are going to charge some kid in oakland $100 for a pair of jordan’s, and nike cant figure out a way to pay the kid in bangladesh $5/hr to make those shoes and still make a profit, then fuck nike, they don’t deserve to exist. maybe they should pay their spokespeople less.

we had just finished the easy course at medinah, a private club across the street from my highschool where i attended prom. some of my friends had caddied there in the summers. one of my friends had told me the story of the super bowl shuffle bears playing there and a few of my friends caddied for them.

we had a big tall friend that we gave a terrible nickname to on account of his mild retardation due to the auto accident that he was involved in as a youth. 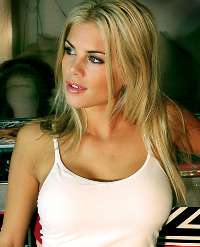 bear quarterback jim mcmahon, allegedly had our friend stand 200 yards in the fairway and used him as a target.

they rode in carts drinking beers golfing making fun of my friend and later tipped him five hundred bucks.

will you stop bouncing that golf ball off your sand wedge, its creepy.

i know, you’ve been doing it for twenty minutes with one hand in your pocket.

“always wants me to take her out. im out all day. i don’t want to go out when im done with my day. i want to chill out.”

does she wear little outfits for you?

“only you can get away with that shit, bro,” tiger said.

for the record, i think private country clubs can have whatever members they want. all whites, all men, all women, whatever.

Cuz one day there will be a brotha club and it’ll just be brothas and white women.

with a brand new “sellout” sticker on the back of his sweater vest.