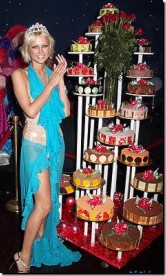 Sorry to hear about your carpe diem. that sucks, it’s time to “hire” an intern. OK, so i wrote this for my own blog, but can put it on hold until i hear back from you for a bachelor party.

Do you know how hard it is to find a midget stripper? Let me tell – it’s harder than you think. Yeah we’ve all seen the movies and that MTV special about “little people” but how many midgets do you know personally? Now of those midgets how many do you think would be willing to take off their clothes for a bunch of guys at a bachelor party? Yeah – those odds are bad.

Even in a town like LA, you would think it would be easy, but apparently there is only one working midget in town (and she wasn’t calling us back). I scoured the Internet and found a guy who specializes in “dwarf talent” based out of Ohio, which is a little out of our way. I talked to a guy in NYC who told me that if I were to find one, it would cost a pretty penny.

A little more searching and I stumbled across a chick who posted a request on some midget porn message board searching for the same thing a couple of months ago. I emailed her and we talked. She told me the lengths she went through to line up a midget, but she was never able to hook one up. I’m not about to give up on this shit! This is one of the best bachelor party ideas I have ever had (you know because that’s my day job – bachelor party idea guy). That, and said bachelor is a little frightened, although intrigued, by midgets.

I dug out the phone book. You know those old yellow things people used before the Internet. I started calling all the escort and stripper services. None of them had a fuckin midget or knew of one for that matter. A couple of the “escort service people” (isn’t that the same thing as a pimp?) were helpful enough to point me to a couple of leads, but others acted like I had just insulted them. Give me a fuckin break – if I were looking for a full-grown stripper you wouldn’t be giving me attitude.

Finally I was put in touch with a casting agent that deals with “little people”. I told her what I was looking for and she said “she couldn’t help me”. I asked if I was talking to the right person, because I was told that person specialized in midgets. She said “I do – I have 30 little people that I work with, but none of them would be willing to do that kind of work.” Ok, lady I haven’t seen a casting call for a new Charlie and the fuckin Chocolate Factory movie- don’t you think you should run this by some of your “actors”. God knows there are enough out of work “actors” in this town who would probably be down to shed their clothes for a couple hund�. Another dead end.

Finally SHE called back. The one working midget stripper in LA. I talked to her she said she’d be willing to do it for $450. Jigga what!?

So after a little wheeling and dealing we worked out a deal for her and her full-sized stripper friend to come to our little soir�e. Every time I have talked to her it sounds like she is on smack, so I’m hoping she shows. I guess for the kind of money we’re shellin out, she’ll be there with bells on.

I may even have a pic or two.

loving: that ashley is here. and she will be guest editing for the rest of the week including “sexy saturday” where this blog will feature sexiness too hot for the working week and promptly take it down before sundown on sunday. whats that ashley? oh, lets just let her speak for herself.

hey everybody! If you’re anything like me, you get frusterated with Tony’s “lies”, “fantasies”, + “make believe stories”. Wanna know what’s really up? Email me by clicking my picture with any questions you have [about me, Tony, Drew, The Brady Bunch, No Doubt, Buffy, Incubus, Matthew Lillard, Jennifer Jason Leigh, Las Vegas, whatever] + I guarantee you 100% honest answers. Be sure to let me know if you want your name signed after your question! Daisy Kisses, ASH*