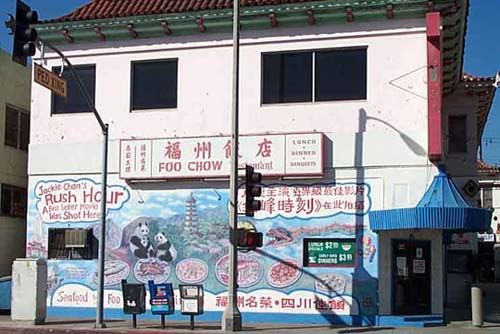 today which was the last day of the run. its been here all summer. we’re slackers.

when we finally found the place the line was forever and instead of standing in it we just decided to go to Philippes and have some french dipped sandwiches but on the way there we drove through chinatown and changed our minds again and decided on chinese. this is what its like to hang out with me.

i love chris so much, it’s good to have her back, she was away in europe for the last two weeks. it’s hard not to think of her as a soul mate because we are so comfortable together and we hold hands and we hardly get mad at each other and she was apologizing for us not getting to see warhol and i was all, ive forgotten all about it, and she said we could stand in line i wouldnt mind, and i said, its forgotten.

so we parked and walked through chinatown looking for the perfect new hole in the wall discovery of a lifetime and ran into Foo Chow, the restaurant that was in the Jackie Chan film “Rush Hour”. Because im a freak i cannot resist such a touristy opportunity so we ate there. it was terrible, naturally. the spicy dishes were not spicy. the rice was bad. the coke was pepsi. chris liked the chow mein, but i didnt, and as is normal to chinese restaurants, the service was horrible and we had to ask twice for water and i wont even mention the fact that the egg rolls showed up a good twenty minutes after the entrees.

i did have a great fortune cookie that said, “dont talk about what you will accomplish, it will delay your progress.”

still it was great to have lunch with my very special friend who has lost about 20 pounds over the last few months and was looking super good in these tight pants and designer shirt and we told each other that we loved each other a lot and we told los angeles that we loved it and when we got back to my house we had two things that we could do: we could take a little nap, or we could do my laundry and then go to my college roommate Chris’s birthday party out in venice.

we decided to nap.

i couldnt nap cuz i napped yesterday all day.

shes in there napping now and im writing you.

i do have a question for all of you out there. its my moms birthday next month and my sister has arranged lodging in Aruba! from the 22nd to the 29th of September, but tickets seem to be going for $650 R/T from here (LA) to Aruba.

Any of you travel-savvy busblog readers know anything about this? Chris flew from here to Amsterdam for $300 R/T, why would it cost me double that just to get to mexico?

anyhow, if you have a sweet hookup that you wish to share with me, you can email me or leave word in the comments box. Gracias, amigos!