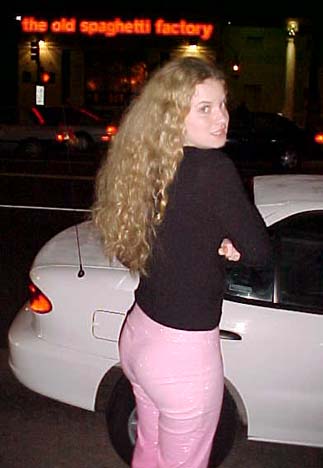 her friends picked her up and took her to several bars and they drank and in the morning they had crepes and saw “chicago”. she was upset that none of her friends from her drew barrymore web site said happy birthday to her and i appeared into a dream of hers and told her it was cuz all of her friends were jealous of her popularity and assumed that popular people didnt need to be told happy birthday to.

she sobbed and said that she isnt as popular as people think and she loves being told happy birthday to.

so i told her that i would put her email address on my blog so that people could wish her happy birthday.

my weekend in hell was pretty good, considering.

in hell its normal to add “considering” at the end of most of your sentences.

i had a beautiful dream that lots of my friends came over to my old apartment and we barbequed and watched the raiders trounce the jets. and we drank and ate and chris brought over brownies and jeanine and kim tried to see who could be skinnier and karisa came over with her pal liz and some dog peed in someones purse and people laughed but then got sad cuz there was a lot of pee, i mean a lot.

then a hot 21 year old girl came over in my dream and watched High School Reunion with me and Best In Show on Tivo and we fell asleep on the couch like little monkeys all tangled up and then we woke up and made beautiful lust.

but then, alas, i arose from my dark cave this morning with no beautiful young girl going down on me, no soft bed to recline in, no remote controlled operated stereo system to drown out the low moans, no towel to wipe off with, no howard stern to drive to work with.

all i had was a little flow of lava to block the entrance to the community shower of slime and a cold of artic wind to welcome me to the working week, and a terribly sore back to remind me that i am old and in a bad place.

and it’s only monday.