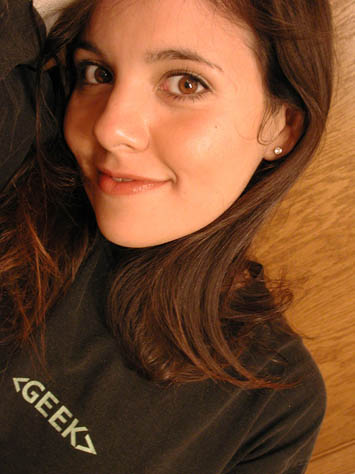 shes the one going to law school, so shes my idol.

theres nothing better than a smart girl.

i read laura a long time ago and for some reason we never talked till now.

the other night we talked about some blogs that we read.

all i have to say is you people have stories to tell and pretty blogs, i wish you’d write in them.

something must be done.

this is the first time in mankind that people from all over the world, completely different people, can tell each other what its like to live where they live and do the things that they do.

xbi called me this morning. apologized for calling on our company vacation. gnarly shit going down in the valley, where its been super hot.

i didnt want to go to the super hot. and i didnt go to sleep last night till five.

the jazz coming out of the boom box on the passengers front seat sounded like monk i could barely hear it behind the bullet proof glass.

when i was a kid i rode in a car by a current pro baseball player and i sat in the back seat and i thought i wonder if anyone knows who this guy is driving, that they just cheered for him a few hours ago.

this morning i thought i wonder if this taxi driver knows that what hes saying on his cell phone right now is being heard by one of the few people who could fuck his shit up in a major way.

cops say that the bad guys are all asleep on a saturday morning.

sometimes theyre in the back seat totally hung.

but today i was woken up by a phone call from my favorite magazine, Black Webmaster.

the woman on the other end said that i was being nominated as best black blogger and she wanted to set up an interview with me.

we ended up doing the interview right there, why not.

she asked me if i had ever been in any rock bands. i said yes. i told her about this band i was in called the burglars.

we’d book a band called something dumb like White Ivory and we’d have four of our friends dress all emo and start playing the first few seconds of their first song, then we’d run onstage with some burly dudes who’d knock White Ivory down on the ground, put their hands behind their backs and pull them off stage where we, the Burglars, would run onstage in black turtlenecks and ski masks and play 15 two-minute punk songs in 20 minutes and then run off while stealing the equipment.

then she asked me about why i lie so much in my blog.

i told her that there is a natural defense to keep ones private affairs private, and if you’re doing something as ridiculous as

and then i couldn’t go on any more.

im no good at interviews. i don’t want to sound dumber than usual i told her.

she invited me to relax. classy chick.

then she asked me what i would like on the cover if i won.

i said that i would just want a picture of my butt on the cover, nude.

that way i could make a tshirt of the magazine cover and it would say kiss my black ass, im on the cover of my favorite magazine.

she asked me what camera i use.

i said, canon powershot s45, but don’t blame them, im still learning how to use it.

she asked what computer i have.

she asked me what i would be doing if i wasn’t a black webmaster.

i told her that i would be growing medical marijuana for the sick, wherever it is that they do that. rarely do you get to do something that so literally helps people during their worst suffering and probable death.

she asked me if i had a green thumb.

i took a picture of my little houseplants that were doing very well.

she asked me if i had ever tried to grow pot, i told her no, that i saw friends get busted for that in college and it was pretty harrowing because i was ironically having a bad trip on acid at the time.

she asked me again how much on my blog was true.

i told her nothing.

she asked if it was true that three of my ex girlfriends were at the tsar show last week?

i said yeah jeanine aj and chris, i should of taken a picture.

i told her that its my belief that they keep me around as a low water mark. if they think some guy they’re doing is a loser, they’ll compare him to me and feel better about things if he’s not worse.

she asked if it was true that i had given jeanine a good long kiss in the middle of spaceland that night.

i said yes, but its a rare thing. once every lunar eclipse. but our love is very strong.

she asked if i had been to jeanines new beachside apartment yet.

she said why not.

i reminded her that i don’t have a car.

she said, the winner of black webmaster this year gets free gas for a year.

27. monty python and the holy grail

28. how to get ahead in advertising

52. it happened one night

62. bingo long and the traveling all stars

100. welcome to the dollhouse