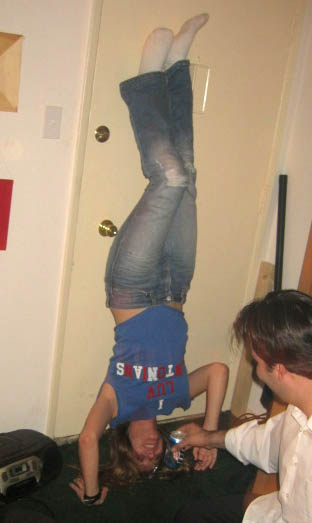 the annual sausage party went off without a hitch, the landlord was grumpy but didnt evict anyone, the neighbor down below made a bunch of noise and answered her doorbell in her lingerie but didnt call the cops, pink dot arrived after several hours and only charged us $30 for two cases of corona instead of $40

and even though there was plenty of nudity most of it came from my ass.

there are tons of pictures but most of them are blurry and drunken and sloppy and happy so use your imagination, it was a party of k*s work friends and friend friends and i got lots of stains on my cords to prove that a good time was had by all.

i like birthdays when the guest of honor isnt afraid to ask for everything that they want. karisa is a carnivore like no other. this girl eats more steaks than you would believe.

so around 9pm when everyone had gathered it became obvious that the macaroni salad and guacamole and homemade birthday cake just wasnt going to do the trick, so i was sent out with karisas hot roommate to the store to get a dozen or so steaks, charcoal, and beer.

we returned, i started the grill poolside and in the dark i made mostly medium-rare steaks for everyone with nothing more than some small tongs and a bottle of A-1. because the ladies didnt have a large assortment of steak knives, several of us resorted to cutting our t-bones with huge butcher knives. it was quite fun. i recommend it.

a handsome hawaiian neighbor arrived with his little dog and made the girls stand up and pay attention due to his striking resemblance to keanu reeves, and none of them noticed when his little mutt did his business by the hot tub.

after our meal we adjurned to the apartment and played a variety of dice and card games. the purpose of the sport apparently was to get all of us as drunken as possible before our drives home. since i had no car, i didnt hold back one bit. first i had mexican beer, then i had light beer, then i had some shots of vanilla rum, then i uncorked the wine, then back to beer, then a shot of some other good stuff.

karisa’s favorite card drinking game is called Allen. since it was her birthday we played a few rounds of that leaving everyone rosy cheeked and laughing.

the cake was delicious as was the evening and i am so happy that i was invited, so thank you karisa for having me over, any time you turn 80 again, please look me up.