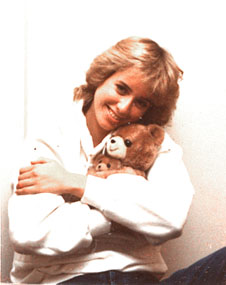 today shes 23. her name is mary. i called her but she wasnt home.

cops once flashed the light in our car cuz we were making out.

aj called me though. shes gonna fly out here to see tsar. right on, aj!

last night welch and i went to the angels game. his dad has season tickets between first and home right above the outdoor cafe where the carrot cake is as big as a volkswagon. i told my mom this today when i called her and she said carrot cake at a ball game? i should have told her about the panda express in right field.

i took a lot of pictures but my computer has a virus so i wasnt able to upload them.

this afternoon i write you from a local internet cafe where the old man left so the kid switched from the oldies station to the modern rock station and now weezer’s dope nose is on.

youve got your problems.

ive got my asswipe.

a girl i would have done anything to date in highschool sent me $10 to the car fund last night.

she says no one calls her missy any more. she lives in switzerland. shes the new school swiss miss.

all day long i wanted to write in here, not that i had anything to say but because i have a terrible issue with habits and rituals. i have to do the same things every day or i feel like im not doing something right. its not obsessive compulsive. its just something that i like to do.

me and welch brainstormed about career opportunities with this blog and with blogger and with the great outdoors and with corporate sponsorship and with wireless technologies and i gotta tell you, i dont think anyone could do it as well as i could. plus i have experience for once in my life. i was the rep for magnavox and then webtv and then microsoft and then the dot com that i was part of.

i guess i could tone down the busblog if need be. i havent poked around bloggerpro that much but im sure i saw a Tone control in the advanced features somewhere, didnt i?

could alice in chains sound any better than in this crazy place with people playing networked video games trying to kill one another?

mark twain wrote some of his best stuff while traveling around america telling the good people about the country that they live in.

i aint saying that i have anything to do with mark twain. but i dont see anyone even trying to do anything these days other than making For Dummies books and i dont think this planet is full of dummies.

i say its time to rock.

i say its time to make a song we all want to sing in the shower.

i say the dot com explosion and then implosion taught me that theres a time bandits window that opens for some for a long time, but for others for a very short time and lucky are those who jump through it for the right reasons, for the correct agendas, and with the greatest number of positive points for all parties possible.

so happy mothers day mom, and mary and all the moms out there in the blogosphere.

thanks matt for the tickets and the ride and the great conversation and friendship and thanks pete for letting us use your angels seats.

lakers all the way,