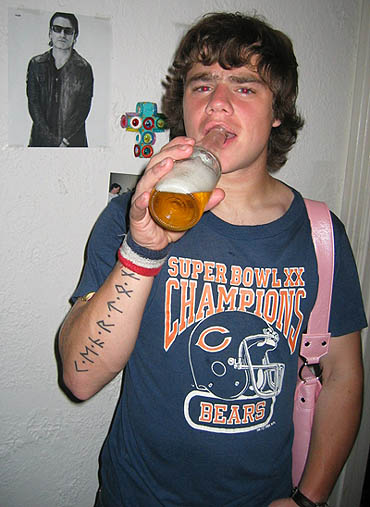 when you turn around and see this guy looking at you.

most people judge parties by the quality of hot chicks, amount of beer on tap, or the variety of exotic drugs in the candy dishes.

but if you dont have those things then you dont even really have a party in the first place so step bitch.

any hollywood gettogether is going to attract beautiful people and rock stars and tv stars and superheros and runaway teens from maryland, bloggers, and theives. and youre going to get those who either were invited by the invited of the invited, or who overheard the address, or who just walked by and got lucky.

bad parties will have drunken frat boy water polo beer bongers who keep jamming the steve miller into the boom box even though the stereo is bumping bitches brew.

bad parties will have coked out mods hogging up the only bathroom applying eyeliner and sniping and ignoring the knocks at the door from people who seriously need to pee.

bad parties will have sleepy neighbors kicking the floor which is your ceiling and call the cops and peek through the blinds once the cops come and tell you that they dont like the smell they dont want to know anything about and the other cop says sir is that absinthe?

and i submit that these parties can be predicted, determined and graded by the quality of strangers who find their way into your home for the festivities. if you look around and see assholes, kick em out, they will fuck the shit up, ruin the mood, and tweak the vibe.

if you look around and see a dude with some jrr tolkien shit tattooed on his arm guzzling a miller high life sporting an eighty five bears super bowl shuffle tshirt and an excellent fake british accent, then you can take off your shoes and enjoy the bash cuz its gonna be okay.

mc brown is the other red flag youve got to look for. if he’s in the house that trumps four or five dumbasses.

if you look around and cant find a random, you’re probably the random. even in your own house.

my terrible memory was exposed when a beautiful young woman reminded me that she and i took in a concert together back in san francisco. apparently we had seen victoria williams at the great american music hall and youd think id remember even some of that, especially with such a pretty girl, but nope. zip. nada. thanks, xbi.

and i was the only drunktard dumb enough to be sipping the baby blue absinthe all night, in big gulps at first, and then waterered down slurps once the walls started moving and the voices started speaking czech.

the hallucinations were vivid and fluid. i coulda swore i saw like five six people on my bed listening to weezer and singing along.

i could have sworn i saw a butterlfly flutter in with a record player and prince’s purple rain on vinyl.

and thats where things get fuzzy.

and last night i went to bed, caught by the sun, and this morning i woke up with the worst hangover ive ever had.

so bad i needed two asprin.

thanks all the nice people who came and drank and smoked and had a great time.

i had a great time too.