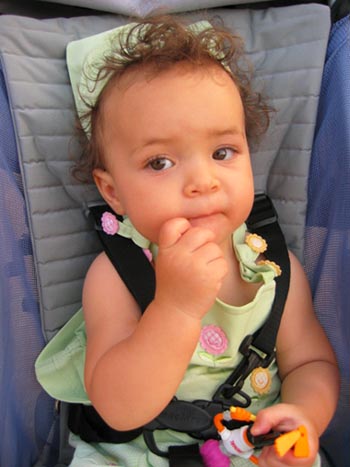 random things have been happening to me even before i was kidnapped out here, so a baby on my patio door, even one that sorta looks like me, didnt rattle me as much as it probably shoulda.

rattled clippergirls cousin though, who proceeded to ask me a battery of serious questions starting with having me name all the girls i had sex with last year.

i was all, who can remember these things?

but secretly i was going through them in my head, silently.

hmm there was that one, and oh yeah, that one.

there was that virgin girl.

i looked at the baby and saw a little bit of the virgin girl there, but then i said, wait a second, i saw that girl not long ago and she didnt say anything about any baby.

then i said, hey now, if the baby’s one years old, we have to think about girls i had sex with like almost two years ago.

and i thought and that was hard. but then it wasnt that hard, me and ashley had a good thing going back then and since i knew she had never gotten pregnant, mostly cuz we were super safe, i knew i was in the clear.

but the cousin of the clippergirl wasnt so sure.

i said, people look like people all the time.

then she said, then tell me why this baby who looks like you ended up on our secret vacation?

i said, nothings secret. there are no secrets.

she said, what about the secrets that you keep?

i said, those are golden. some tales i will never tell, but i would never lie about having a cute little kid.

it was a good baby, it hardly ever cried.

when it did cry we gave it food or water and when that didnt work we changed her diaper.

we almost forgot we had her until we heard her laughing in the middle of the night.

today we’re going to have to find her real parents because we have to go back to la tonight.