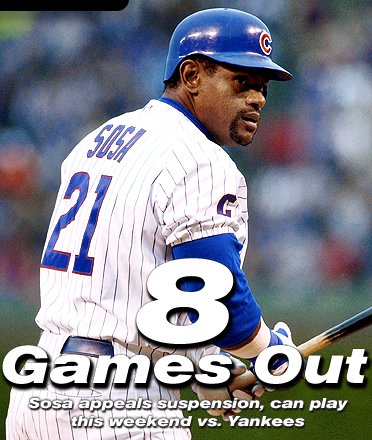 CHICAGO — Sammy Sosa was suspended for eight games by Major League Baseball on Friday for using a corked bat.

The Cubs slugger will appeal the suspension, said Jim Hendry, the team’s general manager. The appeal will make Sosa available for a four-game series against the New York Yankees.

“We support him in his appeal,” Hendry said. “We have no reason to believe it was anything more than a one-time incident. We will support him and his right to exercise and appeal.”

The appeal had to be filed before Friday’s game so Sosa could play.

A piece of cork was found just above the handle in Sosa’s bat Tuesday night when it shattered after he grounded out in the first inning of the Cubs’ 3-2 victory. Sosa didn’t deny the corked bat was his, but he said it was a batting practice bat he had grabbed by accident.

“Some punishment is in order. Hopefully, it can be reduced,” Hendry said.

He noted that Sosa “has been shattering bats his whole career” and no other corked bats had been found.

Bob Watson, baseball’s vice president in charge of discipline, met with Cubs manager Dusty Baker and Hendry at Wrigley Field on Thursday, then returned to New York. Watson did not talk to Sosa.

Other players who have used corked bats have been suspended for up to 10 games. The Cubs had hoped that Sosa’s cooperation, as well as the fact that no cork was found in any of his 81 bats that were checked, would work in his favor.

The Hall of Fame said Thursday that X-rays or CT scans of its five Sosa bats showed no cork or anything else that would violate baseball rules. Baseball officials didn’t find anything in 76 bats confiscated from Sosa’s locker after he was ejected from Tuesday night’s game, either.

“The sad part about the whole thing is that he had 70-some bats and it’s like you still don’t believe it. That’s what’s unfair,” Baker said. “He was wrong with that one bat. It was a bad decision.”

Boston Red Sox ace Boston pitching ace Pedro Martinez came to his Dominican countryman’s defense, saying the incident was being blown out of proportion because of racial bias by the media.

“If it was (Mark) McGwire, it would still be a big deal, but not like this,” Martinez said. “We might be Latin and minorities, but we’re not dumb. We see everything that happens.”

Several other players have been caught or have admitted using a corked bat. But none has had the gaudy resum� of Sosa.

“I feel very bad for having used that bat, but my conscience is clean,” Sosa said Thursday. “I’m not a criminal nor someone who intended to deceive or take advantage of others.”

Baker said his meeting with Watson wasn’t an interview so much as an explanation of what Watson was doing.

“I called him Judge Dread. He thought it was pretty funny,” Baker said. “He just wanted to let me know that they’re going to try to come up with a quick decision, a fair decision. Whatever happens after that it’s up to Sammy and the organization, if we want to appeal it.”

Not only is this weekend the teams’ first meeting at Wrigley since the 1938 World Series, but Roger Clemens goes for his 300th career win Saturday against fellow Texan Kerry Wood. The games Saturday and Sunday will be broadcast nationally, with 90 percent of the country seeing the Clemens-Wood matchup on Fox.