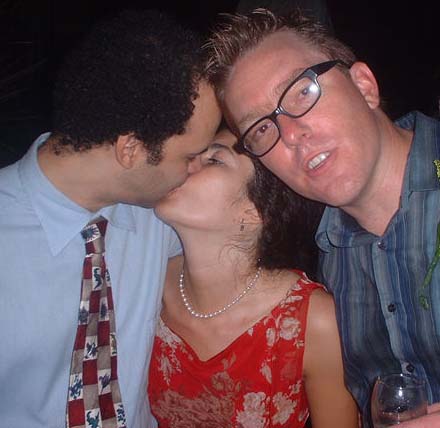 something good. something for you.

then i get home and every night its like this, its like the apartment takes over and all of my plans get sucked away.

even on the happiest of evenings where i think about coming home and blasting the good tunes and dancing around i always end up doing something completely else.

today they had a surprise for us at work.

they blindfolded us and put us in limos.

everyone thought they were going to kill us. we were esping like crazy.

finally i just told them all to relax, that if they wanted to kill us they would just poison the coffee.

everyone began to relax.

we ended up in this place that was really beautiful, i imagined. there were pillows on the lush carpet. the sofas were all pillows, the room smelled of incense, spanish guitar was playing in the distance.

when they unblindfolded us we saw that there were flowers all over and fruit in large bowls and fountains of apple juice.

we were told to sit down.

they washed our feet.

who did? they did.

none of us believed it.

it was weird at first, and a little, hmmm intense? but it was nice.

then they dried our feet and then wrapped them in towels

beautiful women emerged and sat on the chairs.

they held out the bowls of fruit for the women and we were told to remain silent while the guitar played and simply receive.

and the women fed us.

they dabbed our chins with napkins and held the goblets while we drank, and then the women fed us some more.

you are the undercover superheroes of the city of angels

if people knew what you were doing, they would thank you

but even they couldnt thank you enough

then they read off our names one by one.

then they played david bowies heroes as the women gave us shoulder rubs.

then the lights went down

then most of us fell asleep.

when we awoke they drove us to a local theatre and gave us a special preview screening of swat.

which might have made sense in the meeting, but in reality it just brought us back to thinking about work, and wishing it was as easy as samuel jackson made it look.