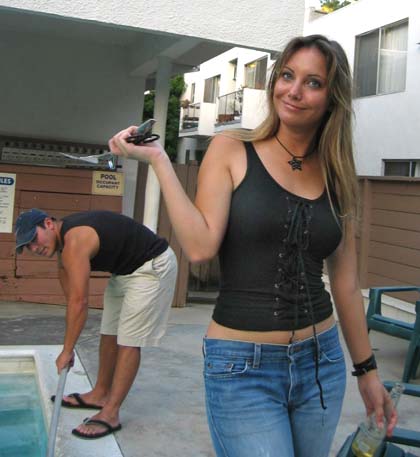 is that theres always a variety of men around who are quick to do anything that needs to be done around the pool.

this weekend liz lost her glasses in the pool, bam, it was fished out by a fellow who we didnt even know.

then someone else needed to get some burgers cooked, bam, cooked with melted cheese even.

then there was the matter of some prescription pills, voila, a perscription surfaced, then a doctor was contacted, then there were pills.

if i did run for governor of california i would have karisa be my leuitenant governor. someone would say, hey gov, we’re going to need some rolling blackouts today. and i would say why? and they would say, cuz we’re out of energy.

and karisa would say, we’re out of energy? and i bet you three, four guys would fall over themselves with alternative sources of power and we wouldnt need any damn rolling blackouts.

if i ever did have a job where i traveled the country writing about america out of the back of a pick up truck i would want karisa to be my traveling secretary. not only is she an organizational genius, but shes a tech head, and good times follow her everywhere she goes. only problem is she doesnt want to be famous. which would be a problem because between the two of us theres rarely a time when attention isnt directed our way.

i went to ihop today for lunch.

we saw a group of people saying grace before they ate. i thought that was adorable.

anyway, the burgers the dude made at karisas were delish, the vodka shots that liz poured got me hot and bothered, and the chatter among the cool kids was good.

all day i had been hot and i wanted to go jump in her pool, but alas, as soon as i got over i didnt want to go swimming any more. i just wanted to drink and hang out and listen to the groovy tunes that another dude had burned for her.

life must be so much different for the tattooed.

i guess thats why everyone gets em.