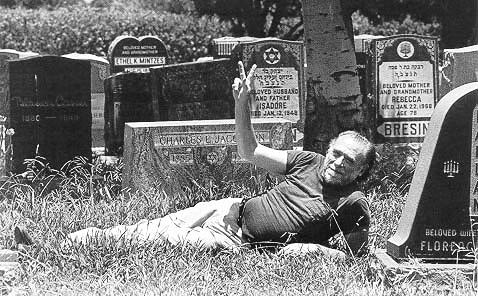 my hero. one of the reasons that i moved and have stayed in hollywood.

one of the reasons that many of you read this blog.

charles bukowski was poor, ugly, mean-spirited, tenacious and for most of his life ridiculously unsuccessful.

he was also an unabashed alcoholic who said that alcoholics were amateurs, that he was a good heavy drinker.

he lived into his 70s and when i say lived i mean lived. he fought he fucked he wrote and he wrote. he went to his stinky job year after year and he bitched but he didn’t whine. big difference.

read any of his dozens and dozens of books and if you took a shot every time you read him whine you’d barely get a buzz.

bukowski was also an accomplished poet. something his idol, hemingway, was terrible at. one day i will show you a poem from hemingway and you’ll be sad for him.

no need to cry for bukowski about anything. in my opinion he was the most important poet of the twentieth century. important because his poems were regularly rejected for decades by the big magazines and yet he didn’t slice his ear off or change his style or write his congressman, instead he kept to his guns and wrote more poems. he produced. and eventually the morons running the asylum died and eventually the poems that had been rejected were suddenly brilliant and the lit world opened its arms to bukowski and bukowski shook them down and went back to la and drank his cheap beer and slept with his cheap women and laughed and laughed.

because his poems were good.

as were his stories and his novels and his american life.

if you want to read about los angeles or hollywood or california start with bukowski and you’ll be happy you did. there wont be many fables about malibu or bel air or the sunset strip which is good because that’s not la anymore than the hollywood sign isn’t hollywood.

minus the alcohol abuse.

here’s to you charles bukowski, the biggest influence of the busblog, next to the Bible.