and take all my friends 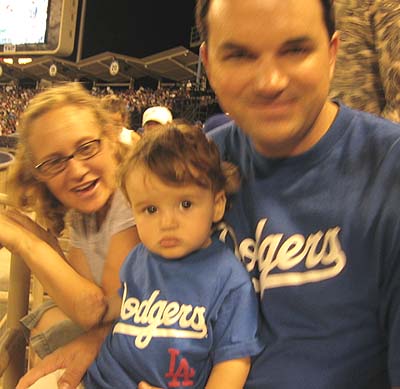 it wasnt such a good idea.

it was a great idea.

i got six for saturday night and eight for sunday, today, and even though i couldnt take all of my friends i did get to go with a bunch and it was fun and its something i hope we do more often.

last night we sat in the front row in right center. me, basart, greg, molli and sean, and bonnie and charlie.

bonnie had never been to a game before in her life.

sean had been to four, and he’s only a few months old.

first inning i was pretending to be a gay european girl and robin ventura smacked a ball that went back back back right into what should have been my glove, but the camera that takes all the good pics on the busblog was in that glove and my gay diet pepsi was in my other hand.

and probably woulda made the catch.

and the announcers woulda said, someone sign that baby up.

but he was snuggled into his snuggly of his dad, my buddy greg, and the ball bounced back onto the field as robin ventura rounded the bases.

the rest of the game we watched intently as we hoped for lightening to strike twice but in life just like in homerun balls, you rarely even get one good chance to make the sweet ass play

and when i saw it on instant replay i agreed with bi vicky, im not all that i once was.

im a mere shadow of the blogger i used to be.

fortunately my friends havent noticed. yet.