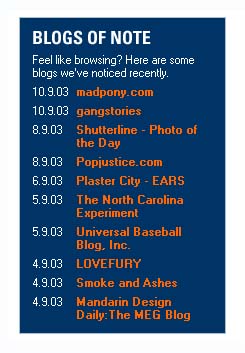 theres more i have to say. here i am on my government mandated 15-minute break and my hand hurts from a fight i was just in, but i have to write, i want to write. i need to write.

writers can be obsessive about what they love, the same way others can. its all bad. everything should be in moderation. what i do has no moderation. super hot chick was over the other day. great ass. i walked over to my computer out of habit and she said, where ya goin? and tapped the empty sofa spot next to her and i had to think to myself, yeah where the hell are you going?

fast as i know how.

had the pleasant opportunity to talk to anna kournikova today. she was touched by the little thing i wrote about her. she asked me how much of it i meant.

i told her that i didnt mean any of it, that i just wrote it to fool people into thinking that i was romantical.

she said, what? you dont think that i will always be your girlfriend?

and i said, no, that she was dead to me, that she is another mans woman now and he has a speck on his face where his bigger speck used to be and she asked me to try not to be jealous and i told her that i wasnt jealous, that i was angry. that she and i had a deal and she broke it. she told me that i would be able to spend a little time with her when she got back to the states, but instead she ran off with her manchild and left me alone to blog like a bum.

at this time i think we should all say a few words for the chicago cubs who need our prayers.

hit the ball hard and with power.

think about all the good little boys and girls who grew up watching the cubs who will die never being able to see the cubs win the world series if you dont win it right now.

thats not what i needed to write, but it will do for now.