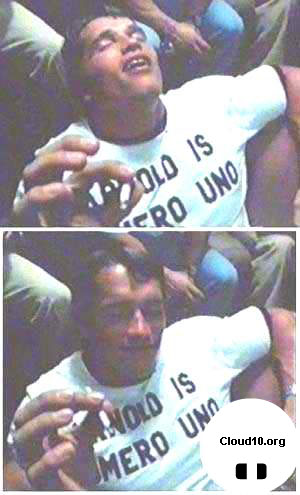 we just don’t want a punk ass bitch whose gonna bullshit people about it and say that all of a sudden he’s changed his mind about it because he chose to run republican.

lived here all this time and doesn’t know how cali rolls.

suddenly ashamed even though he claims he hasnt ever given a fuck.

mr universe and when some frat boy throws an egg just took off his jacket. take off the shirt too, action hero, and dare junior to do the same.

remind us who’s the man.

do it before mary carey beats you to it.

problem with our leaders is they’re followers of a mantra of spinelessness. only people who aren’t ashamed of saying what they mean are the warmongers and puff daddy.

i think his music’s for girls but he did make those fools walk to brooklyn to get him some damn cheesecake.

and they did it cuz they have a dream and they’ll bitch to brookyln and back but they’ll do it and arnold doesn’t want to walk to humbolt so fuck. him.

you know who stuck to his guns?

cruz. the new front runner. the one who says he doesn’t agree with the recall on his boss but if youre going to vote for someone else vote for him.

but bigger than that he wont back down for his affiliation of the never-before-until-now controversial nonviolent latino group MEChA. a student organization that state senator tom mcclintock this week compared to the klan. cuz he’s ig’nant and rightfully trailing in the race. like a bitch.

and say what you want about mary carey

but mary carey aint never lied to me.