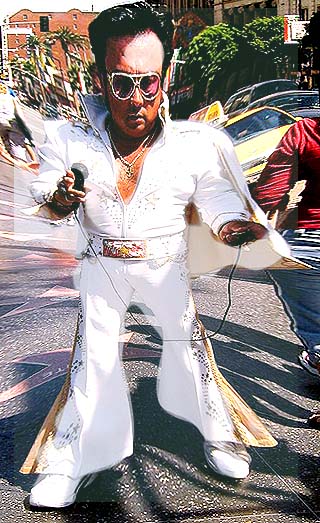 which meant today i had to use the vending machines.

i always wonder what i will do when i retire from the xbi and most agents barely make it past 30, so to be 109, 110 in a month and a half, is pretty outrageous.

today i think i want to work for a vending machine company.

hopefully one of those japanese ones that have like 5,000 slots.

this morning i ended up with a minute maid apple juice and a two-pack of hostess cupcakes. except they werent hostess, it was some knockoff brand.

what i wanted was a bagel or a croissant or a muffin, which apparently is impossible here in southern california in the year 2003.

vending machines should be able to give me fresh fruits, a wide variety of juices and sodas, sandwiches, microwaveables, even magazines and baseball cards. and yet they dont.

the other day i met a guy who looked like elvis and i axed him if i could take his picture and he said no (pictured). i think he was afraid that i would do something freaky to the picture.

the other day i was chatting with a college student who said that she liked me because i didnt come across as a stranger.

i am a stranger though. and im strange. and im almost always happy which is strange. except recently i have hated my commute to work and being at work and you know what im going to stop complaining about it because its not making me happy and nothing good ever happens from complaining.

do you guys not want me to write about my superhero job?

sadly its the closest to the truth that i write in here.

i think she doesnt like those stories because she knows that they probably wont include mentions of her. and people like to get mentioned.

cubs won yesterday. linda says she likes it when i mention the cubs. cubs won. milwaukee coulda put houston away in the 8th but instead they gave up a frickin three run home run to tie it and then they gave up another run in the 9th to lose it so houston won making them tied with the cubs going into todays play.

hi vending company that i want to work for.

hi president of the usa who secretly likes it when i do photo essays dissing him.

hi karisa who im pretty sure im hanging out with tonight.

hi chris who i talked to last night who understands me in such an intense way that i dont know what to do.

hi people who read this.