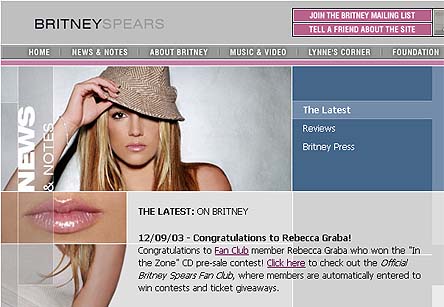 why the Beagle website was so slow to finally announce on its site that it got a message from its Mars lander.

I’ve got the same question, Jeff, but different. Why is it that the Syndey Morning Herald is reporting that Britney Spears got married yesterday in Vegas and BritneyFans.com “the #1 source for Britney Fans” didnt consider it reason enough to update?

“Scottish news direct from Scotland”, scotsman.com is reporting about the 22 yr old songstress marrying her old hometown chum in sin city, and yet BritneySpears.com “the official website” is still congratulating fan club member Rebecca Graba who won the “In the Zone” CD pre-sale contest.

ABC News dot com has it, and yet MTV dot com does not.

and currently its 1am sunday morning. this shit happened more than 24 hours ago.

Britney.com, her record label’s site devoted to her doesnt tell its fans that their pop star is a mrs., which is mighty jive.

World of Britney dot com and britney spears dot org have the friggin marriage certificate, and yet the smoking gun is telling us about an old geezer who held up a pizza hut with an electric drill.

the web sure aint what it used to be jeff.

thats for damn sure.

how can britney.com.br, the brazilian fan club have the news of what might be the most famous young woman in the world getting married, and yet the los angeles times doesnt have a freaking word about it.

how many brazillians do you think they staff at britney.com.br?

how many vh-1ers do you think they staff at vh-1 who hasnt added any news updates since 12/30/03 when they reported on ms. spears’ “toxic” video. dont you think yesterday might have been a good day to stroll into the office after a long weekend, just cuz, you know, they are calling that section news after all. or does mtv and vh-1 have a different time frame for when news isnt new any more?

perhaps they subscribe to the la times’ and the chicago tribune‘s philosphy, which is news isnt new until they get around to reporting on it.

you’d think at least theyd read the paper of record who has several search results linking its readers to Reuters and AP reports of the big news.

my condolences to my man o-dub who shoulda been that guy.

metafilter, by the way, had the item posted at 10pm pacific tonight. and its first wisecrack came two minutes later.

although if the LA Times had a blog, maybe they wouldnt seem so obsolete

my question though is where are the bloggers? wheres doc searls or boingboing? i thought the internet never slept.

all you people gave andrew sullivan money last year, wheres his lazy ass on a saturday night? not in front of a computer like he oughtta be.

my guess is, because of the time difference, blair will get it before glenn.

my guess is the times wont have it till monday.