raymi drops her hat all day. and her shirt. and her accent. and her cover.

if i had some knowledge id drop it on your ass right now. listen to the donnas. listen to the darkness. listen to punk rock. even the worst punk rock, which theres plenty of, dont be fooled, is way better than this bad hip hop that i see the world splooge themselves over.

justin isnt that cute, cant dance that great, and damn well cant sing all that much. but he doesnt look thuggy like jah rule and thats why he gets paid by the man and deludged with grammys(!) like his name was declain mcmanus or some shit. so listen to punk cuz it wont ever let you down. or girl groups or eighties metal bands in two thousand and four.

dave grohls probot isnt gonna steal your money and pretend its anything other than aggression that they figured out how to bottle. thank god for grohl. he knew that foo fighter shit was shit. he knew he couldnt sell out his whole adult life. he knew he couldnt just ride the coattails of the others much longer. he knew what was missing and whats missing is punk rock and metal and lemmy tell you one more thing.

some ho is wondering how i became a “blog god” or “blog king” or some shit and im not sure if she was saying that negatively or in awe so lets pretend the worst since she doesnt really kiss my ass in the statement.

i did it on the backs of my ancestors.

all the motherfuckers who write in bathroom walls. and draw on underpasses. all the rejects and dipwads who piss their names in the snow.

blogosphere is just one huge snowdrift baby and ive dranken a lot of diet dr pepper and rum.

miss montreal wants to see me tonight but i have a date with a pretty girl. theyre both pretty. pretty doesnt matter much to me any more. pretty is in the garter of the beholder. i look in the mirror and you dont see me snapping pics cuz i dont see nothin there worth taking pics of and i cant believe all the people asking me about my hair or lack there of but they do. lord do they ever. they love it. and i love them.

fucking lovefest over here baby which is why people like this shit.

a strungout fiend who thinks hes gonna die any minute so he has to type every drop till its out. 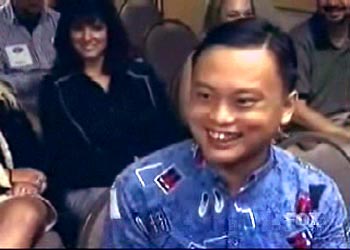 how do i know? because every fucking tv newscast has devoted at least 3 reporters, a copter, a meteorologist, and an analyst to tell us its raining.

its supposed to rain in LA in the winter.

but these news stations are so crazed that youda thought the president got shot.

youd think that there was zero news going on in americas second largest city.

a huge graphic flashes under him. it says StormWatch 4. hes got a blue raincoat on. its barely raining. but enough to cause maybe 75 crashes cuz all the new yorkers who moved out here forgot that you have to slow down when you drive 102349871234 mph on the freeways here.

chopperone is getting worked on in its hangar. i hate the rain. they all tell me that this is a good day to catch up on my reading or writing but i cant. im never stimulated by lack of work. i love to work. i may hate the job i have to do, but i love to work. half the fools in the xbi dont love to work and dont love the job. makes me sick. makes me want to put holes in their foul weather gear.

supposed to rain all week.

might have to get a big bottle of rum and take a swig every time some asswipe gets on the news and tells us that its raining outside.

did you know the grocery stores are still on strike out here? yep.

like someone told them j.lo got a new boyfriend or some shit.

the dan band, the avalon