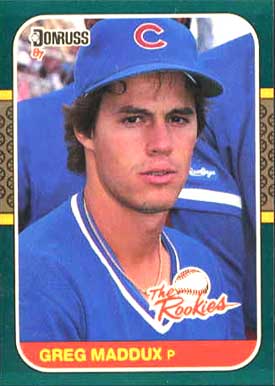 and hes not a yankee fan.

greg maddux has returned home where he belongs, the friendly confines in which he spent his formulative years. wrigley field, the land of milk and honey, the crossroads of america, the house that gum built.

older and slower, but he’s back. and if you dont care about baseball or dont care about sports, just know that your hero will sleep alone tonight, but with a smile, and a spark of a glimmer of hope returning to his (good) eye.

pudge who, we got maddux.

the 21 year old would never have a losing record again.

the professor won 20 games, lost 11, struck out 199 batters and had an insane 2.18 era despite playing half of his games in the hitter friendly wind-aided wrigley field.

he pitched more innings than anyone in either league that year, 268.

in 1992 maddux won the cy young and his right to test the free market waters.

the atlanta braves had the second best pitcher in baseball at the time, mr tom glavine who also had 20 wins in 92, and they had the strikeout leader mr john smoltz who whiffed 215 batters.

ted turner, the braves owner, shelled out $4.2 million for mr. maddux and a pitching dynasty was complete.

greg maddux since 1993 has blazed a trail to the hall of fame. racking up 3 more cy young awards, countless golden gloves, and he’s now only a few games away from recording his 300th win.

he was 194-88 with a 2.63 era during his 11-years with the braves. a team that was perrenially in first place during that stint, only dipping as low as second place once since maddux’s arrival.

he has consistantly been one of the top ten highest paid players in the game as well. last year he earned $14.5 milion.

yesterday the cubs signed him to a three year $24 million deal that would take him to his 40th birthday.

while this is far better than nothing, greg maddux is only 10-10 in postseason play. the cubs beat his ass 3-1 in his only appearence in the playoffs last year.

the braves during that amazing run only won the world series.

however, during his entire career, the last time he won less than 15 games was when he was 22 and had that 4-16 season to forget.

what he can bring to the cubs staff, which is instantly the best in the majors, is experience, intelligence, and class.

if any team was to compete with the yankees other than the angles this year it had to be the cubs and they had to get maddux. and they did.