and not just any old animal. king of the damn jungle.

i don’t know how i got in this fucker.

they feed me. they clean my cage.

kids come to the fence and point. people take pictures. i get my shots.

now and then they’ll toss a female into my habitat and wait for us to mate.

but no cubs on the way.

i wasn’t meant to sit here for this long.

i was meant to roam the jungle.

i was meant to walk where the wild things are.

hollywood isn’t bad. cali doesn’t suck. the rains have stopped. its warmish. the ladies play it safe with knee length skirts tight turtlenecks and fuckmetony boots and i lick my chops and look at the gazelles sipping by the new river.

i know they’re drugging me cuz i just don’t feel like playing with my chew toy the way i used to. i know there’s something in the steaks they thr0w at me cuz im bored with everything.

elephants parade by once in a while and they think they’re so tough. they’re not so tough. but maybe somethings in the water cuz i don’t even want to acknowledge them. when i was younger i woulda told them that if they stop walking im going to take a chunk out of their ass. nowadays i just raise my tail and see what happens.

im fat. im slowing. i climbed a tree the other day and it took a little longer than normal to get back down.

i saw my reflection in the glass today and i looked like a clown.

and i heard about a monkey that did it in 86.

than rot away fenced in 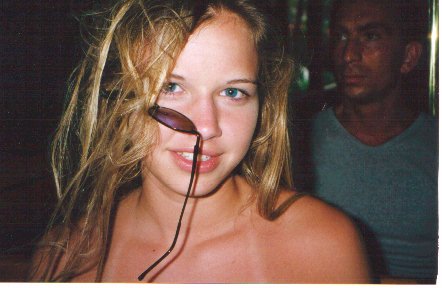 you are seventeen years old today

it still hasnt sunk in to me that the best golfer in the world, maybe ever, is Black.

im not sure if im happy or sad that Tiger isnt an attention whore.

seems to me, the best golfer of all time should be getting a little more hype.

why isnt he doing any more those one-on-one golf matches under the lights in palm springs? why isnt he on letterman more often? why doesnt he have a book out? dvds? a cologne? a line of hair care products.

a how-to book on getting a swedish model to fall for you?

the richest man in the world, the sultan of dubai lets this guy take tee shots off his helipad (pictured). why is it that you’re finding out about this on a blog?

my man had 19 starts last year. he placed in the top 10 in those tournaments 11 times.

of those 11 top-ten finishes he was in the top five 10 times.

of those 10 top-five finishes last year he won the whole damn thing 5 times.

so whats a brotha got to do to get a little love up in here?

if i was tiger’s people i would have a chocolatey protein “Tiger Bar” and a line of golf clubs called the Tiger Tail featuring a collection of drivers called Tiger’s Woods.

and i would make yellow and black toothpaste for kids, and chewable vitamins.

and i would have him get on tv more.

a nice young man reminded me that i am a Christian minister and asked me what i thought about gay marriage and suggested that i write a little something about it on my blog and i thought thats funny, i dont usually get religious requests but ok.

i think even though there isnt a separation of church and state in america nor does there need to be one, if a gay couple wants to be married so that they could participate in some of the same human rights as non-gay married couples like being able to visit or pull the plug on their terminal loved one, or to claim an inheritence, or for tax purposes, etc., then they should be allowed a civil wedding. this is the land of the free, righties. quit being old. those arent traditional values other than ignorance intolerance and denial when you discriminate, especially to our gay lesbian and transgendered brothers and sisters.

however if a church doesnt want to perform the religious ceremony they should be allowed that option. the Bible is reasonably clear about its stance on homosexuality, however the New Testament did usher in a kinder gentler atmosphere. instead of an eye for and eye, we’re told to turn the other cheek. instead of rules prohibiting eating pork and shellfish we’re suddenly allowed to.

but most importantly we’re given a new commandment from Jesus.

thats an order from above.

love is not “be cool about it”

love is “be passionate about it”

love is a strong word and the chosen one is telling us to love even the gays, christians.

love them as much as how much God loves Christians.

some of whom are gay.

but, no, i dont believe that a man who was born a man but then had the proceedure that turned him into a woman, should be allowed to play on the womens professional golf tour.

fucks up the sanctity of golf.