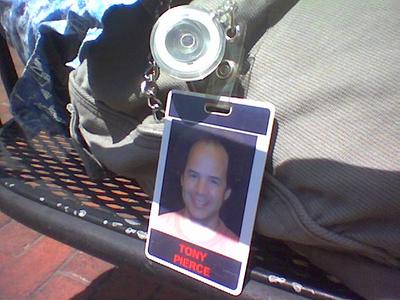 nightline is showing chunks of todays invasion of falluja via al jezzerra. it makes me love television and hate our president.

apparently people actually live in falluja and we’re marching to the center of town. blowing shit up and killing anything that moves on the way in.

the tv commercials remind me that the nba playoffs are happening, that i could buy a lexus if i wanted to, or i could vacation down in san diego if i wanted some fun gambling. then im told about a pick up truck i could own.

now theres a saab commercial. now im being told about the new ride at disneyland. no wait its for disney california adventure. now theirs a nissan ultima ad. and finally a reminder from oprah that shes going to take us into the lives of the olsen twins at one am.

no this war isnt about control over oil.

why would america need oil? for our lexus’s or pick up trucks or saabs or ultimas?

for our mini vacations to san diego or anaheim?

im going to be the special guest star in aj’s college of creative studies class at ucsb.

no way did i ever think i would be able to sit in a classroom there again.

there will be no more updates today since its an early class and afterwards i get to have lunch with my favorite teacher in the world. and some great friends. on the beach.

for one day theres nobody luckier than me.

i promise i’ll try to be cool about.

today and we had a nice little lunch at a fancy french place and one hot looking woman after another paraded by. we were lunching on the patio. and the founder of buzznet said shit i need to get out more often.

and i said, bro, it’s the only reason i still work at this dump.

i like marc brown cuz you can always talk music with him and he’s always got something new he’s into and both agreed at how amazing the william hung cd is, but i was shocked that he didnt know about the secret pixies show in pomona on friday and i was all dude youre slipping you used to be totally the go-to man for such things and he stirred his ice tea and said totally.

i dont know what it is but i could eat french food all day long.

maybe it had something to do with the view.

you have no idea how many emails i’ve gotten about president kerry’s medals and ribbons and him throwing them “away” etc. and you know what, im not interested in debating politics today. checking out girls in miniskirts with marc brown today and being fascinated by a well curved calves today made me put things in perspective.

the perspective that i got was one guy went to ‘nam, twice, killed a bunch of people and got hurt doing it.

other than the fact that my boy seems to be lying about the medals and what he did with them.

but seriously, and this has nothing to do with politics, but debate, but does bush really want to get into a pissing contest about who’s the bigger liar?

i dont think so.

i think he just wants to lunch at chez l.a. and check out the latest in the spring fashions like the next guy instead of comparing and contrasting who lied about what and which means more.

but nothing can beat an ankle bracelette while eating mousse as the breeze blows past the tarpits.

i swear. theres nothing i hate more than tv shows that waste perfectly good air in the name of numbing the minds of the american middleclass.

completely unwatchable show that appealed to the most generic middle of the road portion of the lowest common demoninator.

friends lost it when they canceled the monkey, who was easilly the most talented and interesting character on the long running series.

not that friends ever had it.

and i know it was popular and i know that most of my friends loved it and even my truest loved it and the people that i work with love it and my mom probably loved it.

all i can say is the germans loved hitler so there.

hitler woulda loved friends. perfectly scrubbed white people sitting around pretending to have lives. no black people anywhere until the producers realized that although the show was supposed to be taking place in the most diverse city in america, new york, that it had gone years and years and years without having any black people on the show, sending the crystal clear message that in the white-only fantasy that is friends black people are neither funny, interesting, or a good fit for such milquetoast “humor”.

think any of those real issues that many people can relate to find their way into the show somehow? of course not. that would involve even a whisp of risk. the jokes might not come as easy, but big deal, there was very little that was truly funny about the show in the first place, so go for it.

if you ask me david arquette is one of the funniest people out there. why wasnt he on the show, and dont tell me its cuz he had a huge career going cuz he never had a huge career going. let him date monica on the show. duh. let him be the coked out freakazoid that he is in real life and then you’ll have a little edge to your perfect little hallmark card of a programme.

in a very special friends have chandler risk his entire career because of the legal pills that he became addicted to. if america loves the friends as much as they seem to let the boy act for once in his worthless life and release the pain he must have gone through as he found himself spinning out of control, only to be saved by one of the most beautiful black women in all of entertainment who will become his girlfriend in rehab: lil kim.

instead friends gave you aisha tyler. who is funny. who is beautiful. but is unlike any black woman that youve ever seen in your life as shes constantly smiling, incredibly approachable, perfectly harmless, and although darkskinned as safe a pick for a “black” character as nbc could have found.

lil kim however is her own woman has her own style and is far more new york than anything one would find in the central perk.

in an era where america has shown that they want reality shows, it is not suprising that friends, the most unrealistic top rated show since leave it to beaver (which had more edge) is now calling it quits.

my only plea is that they get on with it already and die.