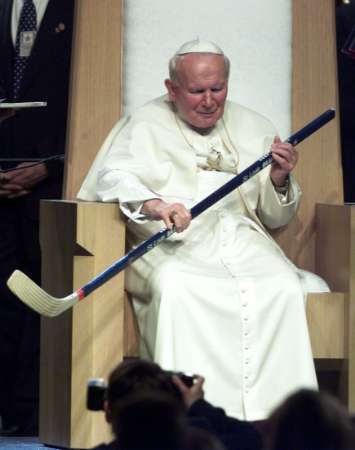 running around saying that america is soulless? is he finally coming out against the american priests who were molesting the little boys?

strangely, no. he was talking about the regular non-molesting americans who are soulless because we actually buy things.

well what do you expect us to do with all our money, the pope? give it away?

as a matter of fact we do.

not like we planned on it, but currently america is running on a $46 billion trade defecit. if we werent as “materialistic” as you judge us as being the world would be $46 billion poorer. is that what you really want?

no, you want to pretend like if the pope says something then it matters.

you know why the good book doesnt mention Popes or Cardinals or Bishops in the bible? because Jesus said himself that the only way to the father is through the son.

so fuck the pope. and confession. and nuns. and celebacy, and the vatican.

“[The American church]…is called to respond to the profound religious needs and aspirations of a society increasingly in danger of forgetting its spiritual roots and yielding to a purely materialistic and soulless vision of the world,” John Paul told several US bishops who were in Rome on a mandatory visit.

And it’s true, we do have some profound religious needs and aspirations to respond to, but materialism has less to do with it than a complete lack of nationally recognized religious leaders who are neither politically motivated nor appear on daily programs that plaster telephone numbers across the screen directing the viewers where to “contribute”.

The pope droned on by saying, “taking up this challenge, however, will require a realistic and comprehensive reading of the ‘signs of the times,’ in order to develop a persuasive presentation of the Catholic faith and prepare young people especially to dialogue with their contemporaries about the Christian message and its relevance to the building of a more just, humane and peaceful world.”

If you want to hold homosexuals to the letter of the laws of leviticus (Lev 18:22, Lev 20:13), then why aren’t you condemning Catholics for doing things like working on Sundays when the entirety of Lev 23 demands that we take the whole day off or be “destroyed”.

Leviticus 19:27 says we cant get haircuts or shave our faces. I see you don’t have a beard you old fuck. Whassup with that? Why aren’t you being turned away by the Catholic church the way gays lesbians and the transgendered are? 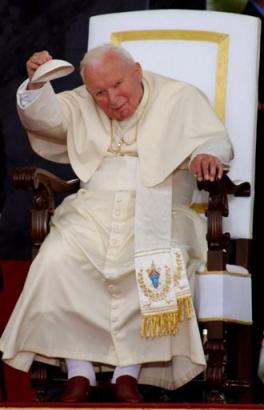 sign of the times says that of all the hypocrites of the world, you and your church are the biggest. and Leviticus and how you pick and choose what parts you want to uphold being your grandest crime.

Same book of laws. Leviticus. So why do the short haired tattoo Sunday workers get let off the hook and the gays don’t?

Leviticus is also the book that says that we cant eat shellfish and pork or fuck our wives when theyre on the rag. How come all of that is cool all of a sudden? Is it because Jesus showed up and changed the rules?

Yes, he did slightly change the rules. In fact he did echo Leviticus once. Once.

which sounds an awful lot like (Lev 19:18) “Thou shalt not avenge, nor bear any grudge against the children of thy people, but thou shalt love thy neighbour as thyself: I am the LORD.”

but the Catholics bear grudges like a mother effer. Ten percent of your neighbors are gay. Ten percent of your clergy is gay (or would be, if you allowed them to come out). Shit the dude who designed the best parts of your castle/church was gay as he was painting the Sistene Chapel. But you don’t love or recognize them the way that you love yourself. You treat them worse than lepers, as even Jesus loved lepers.

“An effective proclamation of the Gospel in contemporary Western society will need to confront directly the widespread spirit of agnosticism and relativism which has cast doubt on reason’s ability to know the truth, which alone satisfies the human heart’s restless quest for meaning,” you said last week to the American bishops, but you dont mean it. How could you mean it since you pick and chose which parts of the Gospel you wish to uphold and which you dont.

If there is a widespread spirit of agnosticism in contemporary Western society it is because by your very existence as “pope” you are in conflict with the Gospel.

I dont expect you to tear down the Vatican, a temple of lies and man-made myth, and since it would be too punk rock to expect you to just let the gays get married the same way you let Britney get hitched in Vegas, what you can do, since youre old and primed to bitch, is tell the world to quit its war on green seed-bearing plants that make people laugh.

Especially since sometimes those plants help soothe the pains that terminal patients feel, and helps ease the pain that regular humans have to deal with every fucking day in this struggle between good and evil and bullshit artists who talk about countries that they dont know shit about.

Yes some of us are very dearly seeking to know the truth, which is why some of us not only read the Bible closely but pay attention more to what Jesus said and did more than the church. And figuring that He even said Himself that the only way is thru Him, this human heart’s restless quest for meaning doesnt need your sorry ass in the slightest.

So tell your bishops whatever you want. You might start telling them to beg forgiveness a little more on tv for the heinous sins of the church. Until then there’s very little to talk to you about.