in february, the white house spokesman scott mcclellan stood up and said to the reporters around the world that the pentagon had found the controversial payroll records that proved that president bush actually served his entire stint while in the texas national guard during the vietnam war.

“These documents make it very clear that the president of the United States fulfilled his duties,” mcclellan, pictured, declared.

But when pressed by reporters, he admitted that the payroll records didn’t really prove jack, prompting DNC Chairman Terry McAuliffe to call bs on the whole “discovery”.

“The handful of documents released today by the White House creates more questions than answers,” McAuliffe said in a written statement.

“The fact remains that there is still no evidence that George W. Bush showed up for duty as ordered while in Alabama. We also still do not know why the president’s superiors filed a report saying they were unable to evaluate his performance for that year because he had not been present to be evaluated. That report was filed on the very day these documents allege he was reporting for duty.” 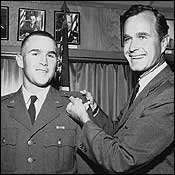 “But I also saw at the edge of that table a roughly 15-gallon, old metal waste can. At the top of that were several pages, 20 to 40 pages approximately,” Burkett said on CNN’s “Paula Zahn Now.”

These claims were called “hogwash” and the search for the records to prove that the President served his time in the guard continued.

Earlier this month the pentagon told the world that the payroll records that would clear the president were inadvertently destroyed in the Colorado clearinghouse along with several other military records of other servicemen.

“President Bush’s payroll records for those two quarters were among the records destroyed,” wrote C.Y. Talbott, of the Pentagon’s Freedom of Information and Security Review section. “Searches for back-up paper copies of the missing records were unsuccessful.”

Upon learning that Texas law requires a backup copy of National Guard records to reside in Austin, the AP last week asked a federal judge to order the pentagon to hand over the documents that should be on microfilm in texas.

Yesterday the Pentagon suddenly found “the” payroll records in question. What they released were Bush’s payroll records while he was in the Alabama National Guard, where he had been transferred to in order to help the ’72 senate campaign of Winton “Red” Blount.

who was Winton Blount?

opposed the Civil Rights Act of ’64

in 1968 after critics noted that the conservative businessman employed no blacks, was active in an all-white church and had backed local segregationist candidates he said, “I suppose that you would basically call me a conservative, but I try to think of myself as a progressive.”

Among the complexes that Blount Inc. constructed included the launch pad at Cape Canaveral that sent Apollo 11 and man to the moon in 1969, the first nuclear power plant in Tennessee, the New Orleans Superdome, and of course the $2-billion King Saud University in Saudi Arabia.

Blount, a Nixon cabinet member called dick “probably the smartest president the united states ever had.” And regarding Watergate, which happened after Blount had returned to running his billion dollar business, he said, “Watergate was a blip and it was not an important issue. Every president I’ve known — and I’ve known them since I’ve been a grown man — has lied to the American people. Sometimes they have to, sometimes they don’t.”

the newly discovered records, like the ’72 blount election results, were disappointing.

“The payroll records show no indication Bush drilled with the Alabama unit during July, August and September of 1972. Pay records covering all of 1972, released previously, also indicated no guard service for Bush during those three months.” the ap reported yesterday.

“If the Bush administration continues to search, maybe they’ll find answers to the long list of unanswered questions that remain about George W. Bush’s time in the Air National Guard,” dnc spokesperson jano cabrera said. “Bush’s military records seem to show up as randomly as he did for duty.”

Monday the DNC national convention begins in boston where they will nominate sen. john kerry who volunteered for combat in Vietnam and earned several medals including a Silver Star, a Bronze Star and three Purple Hearts.

did you know that if you are convicted of deserting during a time of war that you can get the death penalty? strange irony since the president executed 135 inmates during his 5.5 years as governor of texas.

did you know the Instapundit has discussed the President’s missing national guard records zero times? The Instapundit, the world’s most popular blogger at approximately 4 million hits a month, will be on CNN today at noon pacific time. He posts between 15-20 times a day. He is my favorite blogger. Easily.

Update: Glenn did mention the guard records once. On tuesday he mentioned them via a quote that he got from an email about sandy berger. the berger story received scores of mentions this week by prof. reynolds.