in the archives of the busblog

if there are more poor people?

A. because you let them call it a recovery.

i got an comment from our pal Edward from the bambinos curse inquiring about the health of our new shortstop, nomar garciapara, my new best friend.

edward was under the impression that nomar’s wrist is bothering him so much that he might have to go on the DL for a few weeks.

the truth is not only is nomar’s wrist bothering him but his achilles is also sore.

red sox fans like ed (who runs the beautiful sox blog and writes for fox sports new england) had grown weary of garciaparas nagging injuries over the years.

and because the talented shortstop didnt have the greatest relationship with the ownership of the red sox, especially after they attempted to replace him with alex rodriguez, some sox fans believed that some of the injuries may have been exaggerated by the emotionally sensitive infielder.

this prompted cynical sox fans to raise an eyebrow when, after the allegedly injured nomar was traded to the cubs in a four team trade where the cubs had to give away their defensively stong young shortstop alex gonzalez and very little else, he didnt seem hurt at all.

not that the good people of new england would wish ill on their pride and joy, but “wtf” probably went through more than a few minds when nomar neatly compiled a .333 batting average in his first 17 games with the cubs with three home runs, 11 RBI and two stolen bases.

the red sox, you probably know, once traded babe ruth.

and then never won a world series again.

the team they traded him to, the new york yankees, after receiving “the babe” went on to become one of the most dominant and winning teams in all of professional sport.

so sox fans, as you can imagine, get a little a nervous when they trade away their former #1 draft choice, rookie of the year, five time all star, two time batting champ who only four years ago hit .372 (unheard of from right-handed hitter).

they breathed a sigh of relief this week when nomar missed the three games in a row.

not that they wish anything bad to their suffering brothers in chicago, they just were hit with a cold slap of reality when nomars replacement (the defensively minded orlando cabrera) went a paltry 9 for 54 at the plate.

in the last ten games not only has cabrera racked up 18 hits in the last 10 games, but he’s proving to be a dynamite #2 hitter in front of manny ramirez and david ortiz.

mixed with the dark joy of seeing nomar mia for the cubs for three games straight, the messages from the east coast were inevitable.

well, thank you for your concern. nomar returned to the cub lineup on tuesday, he got his first hit on wednesday, and here in the top of the sixth he’s gone 2 for 3 with a ribbie and a run scored.

the cubs by the way are on a four game winning streak, mark prior is currenly pitching and winning 7-2 over the astros thanks in part to back to back homers from sammy and aramis ramirez.

we hope to see you in the world series.

by you, i mean the red sox.

the idea of nomar going up against the team that he loves and hates, in the world series playing for the cubs, a team that nobody could possibly hate, would be drama that would make shakespeare jealous.

especially if the sox had to beat the yankees to get there. 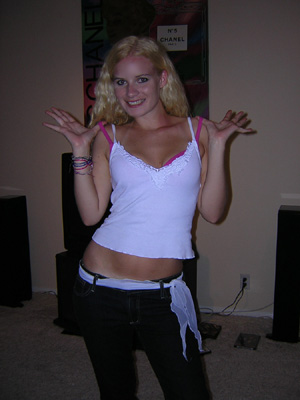 remind me not to arrange for three dentist appointments spread out over three days of vacation next time.

in fact remind me to go somewhere exotic with a girl in a pink bikini like italy or memphis or somewhere interesting.

she gassed me, took some long needles and shot me up, and then went at it with a jackhammer. shes quite good. i never feel a thing.

made it all the way to the fabulous sunset strip and still kept walking.

walked into the virgin megastore which is funny because i never thought i would ever allow myself to buy anything from a megastore of anything other than if there was really truly a place called xXxmeGAStorexXx and i got the new benny hill dvd.

people think it was bukowski that got me into poetry. well before bukowski i was into poetry but during a very important period of my life, my early teens, they started broadcasting benny hill on the public broadcasting station in chicago.

wttw channel eleven. they showed us benny, dave allen, monty python, dr. who, and “image union”, most of those on sunday nights. prime time for anyone procrastinating homework.

limericks arent easy but benny hill was the master at them.

after i do a few things around the house, expect a review of the triple dvd edition that i just picked up for $40 out the door.

yes miss montreal called me psychicaly as i walked near her home even though she has a boyfriend youd think she would be thinking about instead of me. who hasnt gotten any since anna kornikova flew home to russia for a summer visit.

yes ashley will be on the front of my web site again very soon.

yes the cubs swept the brewers and now prepare to do the same to the houston astros who come hobbling into wrigley field.

yes i can get used to this sit at home most of the day in cut off pajama bottoms drinking beer and listening to weezer covers with all the lights off at three am ignoring the booty call ringing on my cell because somethings are way more trouble than theyre worth.

yes ken layne has returned just in time for the landslide.

yes, the president is afraid of a one armed no legged man.