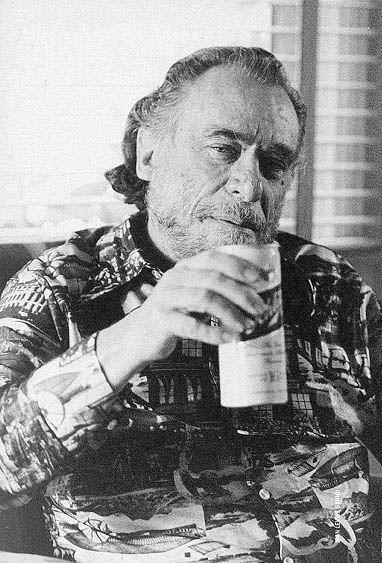 my hero. the greatest writer of all time. the reason for everything.

tonight i write to you from hollywood california, where the king of the world once lived. lived for a long time. drank mostly but lived a lot too.

bukowski, savior to the underclass, defender of the forgotten. hope to the ugly and the scarred and the uncool and the sick.

proof that poetry can come from everywhere, even the drunkard in the corner with the bag around his bottle.

like most great things, the Lord showed me bukowski in a library. procrastinating as always i roamed the 8th floor stacks in santa barbara and found a tidy little row of one bukowski novel after another. mixed in were poems. quick little ones, longer ones.

lines that floated in space

gave you time to think about them

everyday language in everyday settings like diners and hotel rooms and train stations and factories.

and maybe not even the best intentions even, but he was alive and therefore somehow important, and the story would explain what first glance couldn’t.

being the best is about banging it out every day and every night better than the next guy, and definitely better than the pretty boy. its about taking back the night. its about picking fights until everyone knows that you’re in the ring and you might not be the king of each battle but you’re a force to be reckoned with. somehow.

bukowski didn’t have to speak french in his novels the way hemingway did. he didn’t have to tap dance around his drinking or stick his pinkie out or have to use the right glass or be international. he just fucking drank.

hem talked about wars and signed up and fought and buk fought too except he didn’t have the luxury of leaving after a few years, hank fought for decades. and lost for decades.

hemingway was 24 when he wrote the sun also rises and it was published immediately.

bukowski never had a steady publisher until he was nearly twice that, hell, he didn’t even start writing seriously until he was in his late thirties, but as soon as he started writing he never stopped. not even his mindless fulltime job at the LA post office that nearly killed him after his third year got in the way of his writing. in fact, when he returned to the grind and stayed there 12 more years, he finished his run by knocking out one of the finest novels of the american working class “Post Office.”

As a matter of fact, once John Martin launched Black Sparrow Press out of his own pocket, pretty much just to allow bukowski to quit his job and write as much as he wanted, he reeled off an impressive string of novels and poetry collections of high quality, creativity, and depth.

Burning in Water Drowning in Flame, 1974

Play The Piano Drunk Like a Percussion Instrument Until the Fingers Begin To Bleed A Bit, 1979

Dangling in the Tournefortia, 1981

i like bukowski because he barely bitched about his lot in life. he didn’t run around saying oh woe is me. he didn’t write about how ts eliot was kicking his ass in book sales. he didn’t whine about how a certain young lady said she wouldn’t f him even if she lost a bet.

one thing bukowski did that i wish i had the guts to do was send his shit out to the world. he mailed off his poems and his stories and his everythings out to the publishers and magazine editors and newspapers and they mailed pretty much everything back.

far too punk rock for the good paying literature mags of his day, bukowski was forced to write for sex papers underground magazines and collections of unheard poets and writers. but unlike van gogh he kept at it. getting little nibbles here and there. writing regardless. telling the stories of everyday life in americas lower class.

he married a wealthy five-foot tall texan with a stiff neck, divorced her, and then married two other times.

late in his life good luck found him and not only did he die wealthy and famous, but he lived the last decade of his life respected for staying true to himself, never selling out or changing for the times or for the big bucks.

his stories and novels live on. his poems resonate stronger now than ever. theres not a writer alive who match him with the one-two punch of poetry and fiction, longevity, and production.

and unlike papa hemingway and the other quote unquote important american writers other than twain, bukowski could make you laugh.