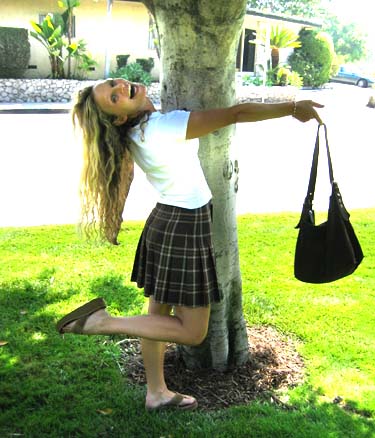 she will call my cell phone, when i dont pick that up she calls me in Chopper One, something ive asked her not to do as, well, we’re fighting crime. thats what we do.

some of us work for a living, ive been known to tell her.

some of us dont sit on a stool selling flowers to cheating husbands and begging wanna-be boyfriends.

all the conversations that take place on my cell phone or in chopper one are recorded, so i could verify them with written transcripts, but i wont bore you with the details.

so today i told her that i was going to be at my favorite hideout later in the day and that i would take her there for lunch, and if she was good, for the hip hop that will take place there in the eve, as they are having their summer party.

but because she is a drama queen and because everything is either boring as fuck or the end of the world, today when she called me frantically in my cockpit i thought something was tragically wrong at the flower stand.

oh my god, she told me, my mac wont be delivered till next week!

tragedies of tragedies i told her, which didnt sit well with our overly excited blonde girl from jersey.

you dont understand tony, i wont BE HERE next week.

once again overstating the obvious.

i was all, danielle, i can get you your computer, just chill out, im working right now, i will call you before i leave to pick you up for lunch.

to which she said FINE! and hung up on me.

little did she know but i was flying about a mile above and to the west of her.

i could have very easilly dropped something very irritable on top of her cute little flower stand that would have destroyed the loveliness in seconds, and done much damage to her beatiful locks.

earlier in the day when i told her that flagrant had emailed me and asked about her, danielle was super excited.

i dont remember, i think she said you were pretty.

i bet she said i was fat, she pouted. danielle hadnt gotten her coffee yet.

no, i very clearly know that she didnt say you were fat.

the prettiest ones seem to have the scariest things running through their cute little heads.