John Kerry on the Daily Show

i’ll admit im a ignorant blowhard at times. a jackhole who talks out of his ass. a beligerant predictable fool who knows as much about politics as macrobiotics, but i can tell the difference between a retard and a dullard

and so can america.

the interesting thing is how much of this country backs the tard no matter what just because he’s wearing their gang colors.

i feel about george w. bush the exact same way that i feel about sammy hagar in van halen:

i realize some of you fucking frat boys just need someone to nod your head to, but this isnt even good.

know that every time you tell me that george bush deserves four more years running this country, all i hear is “sammy haggar deserves to make four more records with van halen.”

and i want to slap you.

and it makes me know that you’re high on something.

and then i become jealous.

and then i want to slap you.

john kerry was on the daily show last night and the man is no clinton.

hes stiff, hes softspoken, hes awkward, he sounds like someones dad, he looks like he’s gonna fart any second, and the pressure of possibly losing to one of the dumbest and least-successful presidents of all time has got to be a motherfucker.

id suggest that the dude lighten up, but the scary thing is i think he is lightened up.

which isnt that scary, really. call me crazy but i think i could deal with eight years of a boring serious dude who isnt in bed with the saudis. i think i can live with the price of ketchup going up the way oil has under the bushes for example.

everyone is all, fuck the medals fuck the national guard records fuck nam and cambodia, lets talk about the real issues.

gasoline is a real issue that pretty much everyone who doesnt ride the bus has to deal with.

gasoline is so fucking high that when it drops to $1.89 people are all “whooo-hooo, lucky day!”

its almost as though people know that when your president’s family are oil people then you’re gonna get screwed at the pump when hes in office.

its almost as though it went up and up and up until people almost couldnt stand it and then it sank down to a reasonable gauge that people dont even murmer about and thats where it stays.

john kerry was on the daily show last night and he was pretty dull. he tried to laugh at the very funny john stewart but he was obviously afraid that if he did he’d fart and he didnt want that.

stewart knew that he would ramble into his stump-points and the following exchange took place: 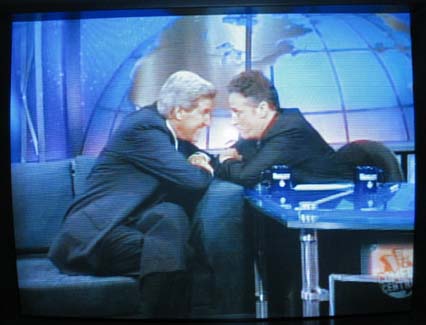 Now how– how are you holding up? This has been a– it’s been a rough couple weeks. I’ve been following– I watch a lot of the cable news shows. So I understand that apparently you were never in Vietnam. (LAUGHTER)

(LAUGHTER) That’s what I understand, too. But I– I’m trying to find out what happened.

Exactly. It’s nice, though. I know– 35 years ago I have friends that have come forward and say– you did have cooties. You know, that sort of thing. (LAUGHTER) Is it– do you– do you– is it hard not to take it personally?

Is it a difficult thing not to take personally when– when they come out and– and your word, it’s– it’s in the public files. So–

You know what it is, Jon? It– it– it’s disappointing because I think most Americans would like to have a much more intelligent conversation about where the country’s going. And– (APPLAUSE) yeah, I think that– you know, and– and, yeah, it’s a little bit disappointing. But believe it or not, I’ve been through worse. (LAUGHTER)

Right. I– I can imagine. When– when– these guys– were you surprised at all that–

Sure I’m surprised. But surprised in a sense. But now that I begin to see the web and the network, I’m not surprised. I think– you know, it’s politics. And for whatever reasons, the– the– and I think Americans will discover it as we go forward in the next four or five weeks, George Bush doesn’t wanna talk about the real issues. I mean, what’s he gonna do? Come out and say we lost 1.8 million jobs?

Four million Americans lost their healthcare. We’re going backwards on the environment. We– angered everybody in the world.

Sir, I’m sorry. Were you or were you not in Cambodia on Christmas Eve? (LAUGHTER) They said– you said five miles. They said three. (LAUGHTER) (APPLAUSE) No, I– I think that’s a very interesting

it was very funny.

thing was, what started as a joke (Stewart sarcasticaly ambushing Kerry with the question of the day) actually could have been journalism if Stewart had waited a tick.

but because it was a comedy show, when the president didnt have a snappy, funny comeback (or for that matter even sense the humor and sarcasm) jon stewart bailed the nominee out.

theres no question that sen. kerry appeared on the show because it would be a softball appearance the same way the president and the first lady were on larry king, a way to get on national tv in a cozy warm-fuzzy manner.

not only did stewart miss a great opportunity by letting kerry answer the question, but the would-be president missed a greater opportunity by not having an answer ready for a sure fire slam dunk in such a friendly confine as the daily show.

and knows that theres a time and a place for everything

and i would wager that even if kerry did have a good comeback, it would be in his best interest to keep it in his pocket until the proper time and place,

then it’s in john kerrys best interest to make them feel comfortable in their lunacy.

which would lead nicely to a hilary/barrack ticket sure to bring back the drama that we would yearn for.