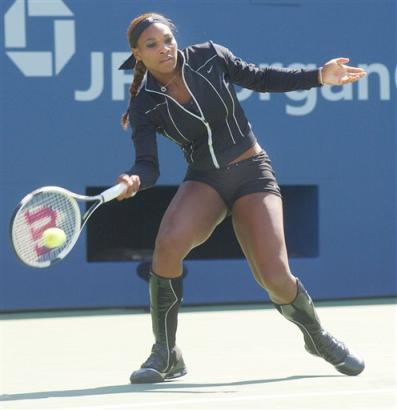 typically the coolest head at the college rag that helped produce welch, both whalens, dougie gyro, mc brown, a big wig at sony pictures, a dude who writes for the daily show, a suit at cbs tv, and dozens of other success stories, amy continues to exude the class that i am sorely missing.

one of my favorite opinion columns at the paper “just words” was inspired by our heated debates of my use of a certain cuss word.

there will be a day when the Daily Nexus years will be documented on stage and screen. i would pick serena williams to play amy.

why? amy is a thin-as-a-rail pale white girl from bakersfield, hardly anything like my thick nubian wimbelton princess.

because like serena, amy emerged from the shadows to claim victory over all of her naysayers, evoking a style of her own and the heart of a champion. who would have thought that amy would have what it took to control all the testosterone and attitude delievered by a newsroom of budding geniuses?

but she did. and dare i say that many of those young men are hard-pressed to find much that they created after the nexus that was as dynamite as when under her watch. of course there are a few exceptions. but not many.

it was my great pleasure to hang out with amy this summer when we had our nexus reunion, and the nice thing about time and distance is that now i appreciate those days even more than i ever expected. of course during the many whiffle ball games in the bright sunshine next to the beach i understood how fortunate i was, but now many years later i see that indeed it was not only a time to remember, but an experience that i will never forget.

the work ethic and just plain old ethics that amy taught us via leading by example is one that i see resonated through welch and lallum and others today, but to see them first hand at such a young age was something that was of vital importance to me.

when, for example i bitch and moan about the president of the united states bullshitting the american public about how his records are complete, when they are clearly anything but complete, i think of amy and how she would have salivated at such a way to expose the lying liars.

happy birthday boss, i hope you have a great one.