i first met my mother a long time ago. im not sure what she expected but she got me and you know she didnt predict this, but for a mild mannered southern belle from ft. valley georgia, she didnt freak out as much as you’d think.

so when the doctors called me hyper she said, but my boy can sit still and do a whole jigsaw puzzle, and the doctors said, oh, really? and then were unable to prescribe the ritalin or whatever they were going drug me with and we went on our way.

my mom raised not only me alone, but my sister as well. who is also crazy. my mother was never bored. she worked long long hours at motorolas headquarters and sometimes i think its because she didnt want to come home. but when she did it was always with love in her heart and mcdonalds in the car and questions about homework or basketball scores or the like.

i could never have asked for a better mom.

her mother was a librarian at the state college. during holidays we would go down to georgia and we’d always end up at the library and i am sure that my love of books and writing is directly influenced by my razor sharp grandmother who read two newspapers before 9am and was working on one of her novels before breakfast was done.

one day a “friend” of mine fell on the playground and lied to his father and said that his black eye was the result of me punching him. his father came to our door with his son and told my mother that he was informing us that he was going to spank his son because no son of his was going to be beaten up by a nigger. 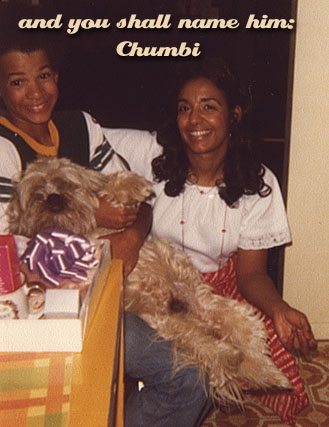 instead of freaking out my mom sat me down and said that she knew that i didnt beat that boy up, but that race is a difficult thing for people to deal with, that we needed to be patient cuz the world would catch up with reason soon enough.

my mom always threw big birthday parties for us, she gave presents to all the attendees, she drove us to practices and games and rehearsals and recitals. she went to parent teach conferences, she drove us to the airport and back, she took us clothes shopping for school supplies in the fall, she did it all, and i dont remember her complaining and i dont remember overhearing her ever saying that it was too much of a burden.

there was never anything that i wanted that i wasnt given. ever. and we were not by any means a wealthy family. i have no idea how she did it. she was always there. was there when i went through college. is there now for my sister and my neice and my brother in law. was there for our dying relatives. is there for our friends of our family. she is rock solid.

one of the finest moments was when my mother took me to my first real rock concert. AC/DC Back in Black tour. i was but a wee lad. she had given my sister the album that christmas and here it was nine months later and somehow i got 1 ticket in the 12th row. my mom drove me to the show (about an hour away), dropped me off early, drove home, and then after i called, drove back to the arena to pick my little ass up.

not only would most mothers not allow their kids to see devil music (hells bells opened the show and i nearly peed my toughskins), particularily Alone, but how many would make two trips to ensure a safe ride?

when i became of age to drive she tightened the reigns in a tad because in her words, “the roads are filled with drunk drivers”, but i was still allowed to drive into Chicago to see the cubs pretty much any time i had saved up enough allowance money to pay for it.

over the years she bought me a few saxamaphones, guitars, drums, lessons of all sorts, sports uniforms, bikes, anything.

i cannot imagine a better childhood. i cannot think of anything i could have wanted more than the ability to be myself, and free, and loved.

my mom did all those things for me and she continues to.

the only thing that she asked in return was that i be a good reflection of her.

and if it werent for the swear words in this blog im doing my best.

i love you mom,