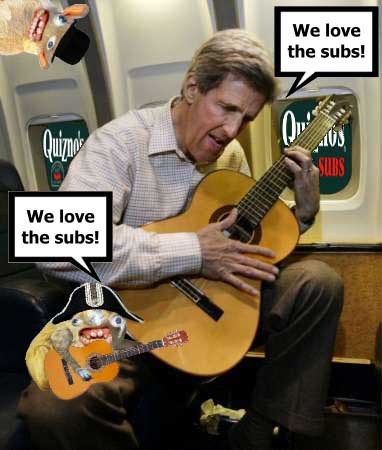 If you can make a few bucks off your blog, then fine. Why shouldn’t everyone get a few hundred bucks off their shit if someone is willing to pay it?

I don’t have any problem with that.

What I have a problem with is what might happen in the near future.

Say im a blogger who posts one thing a day and makes $50 a month off ads. That’s pretty sweet since it’s obviously a hobby, and yet $50 will pay off the dsl bill and fill up the gas tank once a month.

or buy you your monthly bus pass.

But why wouldn’t someone then think, “but how much could I make if I posted three times a day and kissed up to a few of the A-list bloggers in order to get more hits?”

But get a nice link from Atrios or Blair or Instapundit and he could very well get 2500 hits in one hour. Figure out a way to make that happen once a week, and there is no question that he will make a lot more than $50 a month through his ads.

The problem is, that blog now sucks because in one or two of those extra posts a day he’s pandering to supplement his income.

Or writing emails to that a-lister giving him links as to what he should write about.

But what happens if the now B-List blogger starts to disagree with some of the things his A-list sponsor is writing? Will the b-lister risk the meat-and-potatoes hits from his provider and call bullshit? If the b-lister has a penchant for delivering harsh, powerful diatribes against the things he feels strongly about, will he direct that sort of energy to his a-list massah

Or will he sell out and shut the hell up.

Odds are he will shut up, or write about his cat.

And that’s how the blogosphere turns to shit.

I sell out enough with the career I have chosen to accept. Why should I start selling out with my fucking hobbies?

Don’t get me wrong, ads on their own are fine. But when they’re tied into hits-per-week or hits-per-month (which they’re destined to), and when those hits can go up (or down) significantly due to one major blogger, then what ever shred of credibility the blogosphere has drops significantly because it will slowly be shaped by the ass kissers and the echo chamber.

Let’s say you are an A-lister, closer to the B-list border. Let’s say that on a Number of serious topics you disagree with your a-list sponsor. You’d be out of your mind to disagree with him on your blog, especially if as an a-lister you’re currently getting a car payment a month off the ads on your blog.

Who wouldn’t sell out for a free car?

It’s just a blog, after all.

And if you’re an a-lister, why wouldn’t you only link to people who agreed with you and linked you all the time? You weren’t born getting tens of thousands of hits a day. What a better way to keep your hits coming?

Because it’s insincere. Because it adds to the suckingness of the web. Because that’s not why al gore invented the internet.

The best form of blogging is about presenting both sides, debating the major points that each side brings to the table, and coming to an intellectual conclusion supported by linked facts, diagrams, charts, and research.

Sad thing is, as seen by Drudge and Instapundit, research and great writing don’t get as many hits as short little sentences ending in a link. These two conservatives have proven that their readers aren’t interested in reading. They want something to click and maybe then they’ll read, but don’t hold your breath.

So if that now b-lister wants to really make more money, the lesson that Drudge and Indy have shown is don’t write. Just link things that make the right look good (or not as bad). And if that b-lister actually follows that lead, well now we have gone from one decent post a day to none. Just a bunch of links that his blogfather would approve of.

All because people have the insatiable desire to make money at things they were barely any good at in the first place.