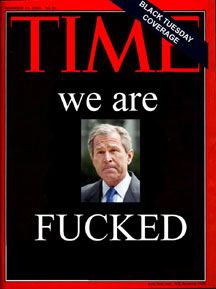 in the wake of getting his retarded ass kicked last week by sen. kerry in the debate, today the bush administration announced that the president will have a speech with the nation on wednesday to set the record straight.

which pretty much is a vote of no confidence in the vice president who is scheduled to debate sen. edwards in a few hours.

cheating? can a president abuse his power by holding a (you’d think) nationally broadcast “speech” (free commercial) to say all the things that he didnt say last week?

freaked to all shit? should a president with two more debates coming up freak out and resort to reading from a tellyprompty after it has become painfully obvious that he simply cannot think on his feet regardless of how much prepping he is given?

is this the october suprise? many have speculated that this october, if his back was against the wall, that bush would “find” osama bin ladin, revealing him in chains for all to see like a modern day king kong.

whatever it is, it’s lame, desperate and pathetic, says this blogger, but not at all unexpected from the always tricky republican party who never stops trying to win, and for that deserves a little credit.

WASHINGTON (AFP) – Concerned by a loss of momentum after his debate with John Kerry, US President George W. Bush has abruptly scheduled a major speech for Wednesday in hopes of halting the erosion of his lead in the polls.

In a rare, last-minute change in the presidential schedule, Bush has scrapped a planned talk on medical liability and instead will give what the White House called a “significant speech” about the two central issues of the campaign — the war on terrorism and the economy, The Washington Times reported Tuesday.

The president is said to be eager to rebut Kerry’s attacks on such issues, especially those that came during last Thursday’s presidential debate, according to The Times.