im pretty sure she watches it every day.

to thank her for the great dinner party that she hosted last night, heres some excerpts from the Seinfeld Dictionary

Assman – 1) a Proctologist 2) a person who displays his/her name on vanity license plates.

Astronaut Pen – 1) a pen that is capable of writing from an upside down position 2) a pen that a crabby old man from a retirement community gives to someone, with the hopes of creating nasty gossip, before Degifting the pen

Beef-A-Reeno – a canned pasta dish (similar to Chef Boy-Ar-Dee) that is bought in large cans from warehouse clubs, and then fed to horses, who in turn emit a foul odor

Big Salad (Taking Credit for a) – when a person hands another person a large salad, and takes credit for getting that person a salad, when in reality the person handing over the salad never actually paid for it (someone else did)

Big-Toe Captain, The – a failed comic bit about how the big toe is the captain of the other toes on the foot, written by an out-of-work comic wannabe

Bipartisan Mirror – a mirror that is situated in a clothing store with the intention of making a customer look better than they actually are, when they are trying on clothes

Boombox Incident – when a short, stocky, and balding man takes a teenager’s boombox away at the beach for playing it too loudly, and tosses it into the ocean

Break-up By Association – what happens when a man and woman break up, and the man’s friends no longer associate with the woman

Breathtaking – what to say about a person (or baby), when trying to be polite (especially when you don’t mean it)

Bubble Boy – 1) a foul-mouthed, bratty boy with an Immune Deficiency Blood disorder who must live inside a plastic bubble to keep him in a germ-free environment 2) the same brat who enjoys squashing people at Trivial Pursuit

(we’re experiencing some global cooling. and it sucks.)

Q. Do you own a winter jacket?

A. yes, but it only comes out when it’s below freezing.

Q. Do you like the winter mountain sports? Skiing, boarding, sledding, snowshoe, etc…

A. yes, in theory. it would take a might special occasion or a pair of hot chicks to get me out there though.

Q. Big Bear, Mammoth or other?

A. ive heard of those places. i hear theyre close.

A. swiss miss with a shot of warmed spice rum to chase it.

A. i have never turned on my heater in the four winters that ive lived in this apartment, although i am considering it. but when it is cold like now i use the fireplace or a space heater. usually on the middle setting.

Q. At night, more blankets, more pajamas, more heater are all of the above?

A. one mexican blanket and one electric blanket. no pajamas. no heater. subsititute a cheerleader for a blanket on particularilly pleasant evenings.

Q. Do you go out and enjoy the cold or bundle up and stay inside?

A. i stay inside even during the summer.

Q. Cold temps. Stay for a while or bring back the 70s?

A. no way will i tolerate another week of these sub-70 temps. i might have to move to maui.

a lot more questions than we saw last night. but it seems to me that there was a nice little path that he could have taken when dylan said that he wouldnt be able to write the sort of songs that he used to write.

you know, the classic ones.

which isnt to say that he still isnt putting out great records, because he is. despite the fact that most rock stars cant make good records as they get older. let alone continue to make great records after theyve made their two or three masterpeices.

dylan said that the great records of old were from the great wellspring of creativity. so that means the followup needs to be, so why cant you as an older man get to that wellspring again? is it an age thing? is it a luck thing? if its magic does that mean that its pure luck, or part science?

they should have given him the whole sixty minutes.

i woulda said, is it too emotional to go back to that wellspring? is it too painful?

there was a time when i was in college and i tapped into something and all this darkness was in there and hidden were these beautiful treasures. but i was terrified to go back in there years later because of all the darkness required to wade through.

is that what dylan was saying?

not that he Can’t write those types of songs again, he just doesnt want to?

i would have asked if he gets tired playing those old classics show after show. cuz one thing about dylan is he will play blowin in the wind for your ass be it at madison square garden or the bakersfield bowl.

i would have also asked him if he feels proud that springsteen was supposed to be the next dylan and never was able to really do it.

i would have asked him why he seems so sad and pissed off.

i would have asked him what he thinks about johnny cash and all the cover songs that rick rubin had him do in his twilight years and if he was interested in doing some albums of current music.

and if i recall, ed bradley didnt ask him why its been 20 years since his last tv interview and if there was a reason for the cold shoulder or what.

i would have told him that he was great in the wilburries, touring with the dead, touring with petty, and even when he was in we are the world, and i would have asked him if he plans on teaming up with someone else again soon, like tom waits. 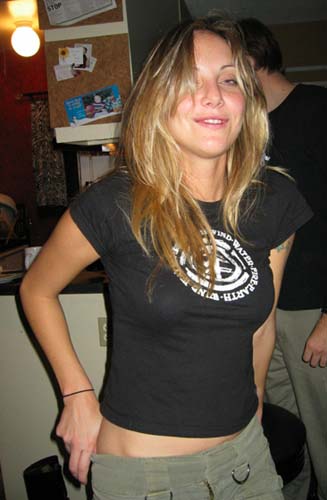 only time this blog will give you the weather in la is when it rains.

or when its cold.

it was cold and rainy today in la.

karisa was having a little dinner party. usually i would pass. but last night i had such fun with my friends that tonight i hung out some more.

karisa made stuffed mushrooms, she had brie, then she made a shrimp pasta dish, and a former coworker of hers made a delicious terra misu.

always the multitasker i brought over a pillowcase of dirty laundry to undirty.

and i remembered how this cat and his brother, good kitty, were a terror as kittens and how they got super sick and how one of them got hit by a truck.

and i remembered how many times i had either told karisa to kill the cats or sell them or toss them out a moving car or anything other than have these expensive headaches.

but fortunately nobody listens to me.

karisa would lay on her couch and mother these cats and totally care for them no matter what often times falling asleep cuddling them.

some say she mastered those skillz on non-cats, but im telling you, she had both good kitty and bad kitty perfectly trained.

no matter how crazy and unmanageable it might seem in the early stages.

for if you hang in there

it could end up being the best youve ever had.

and when i went out to get my laundry out of the drier, bad kitty followed me out,

cuz it can be crazy out there on the cold wet streets of hollywood, at night.