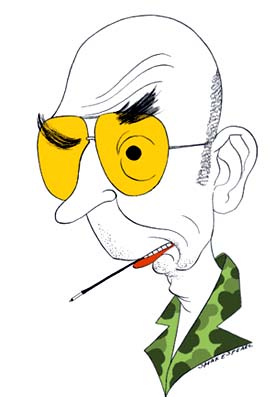 ”A plastic man in a plastic bag,” Hunter S. Thompson wrote of Dick Nixon in 1968. Last year he wrote about George W. Bush: ”He talked like a donkey with no brains at all…. I almost felt sorry for him, until I heard someone call him ‘Mister President,’ and then I felt ashamed.”

Hunter S. Thompson spent his long glorious & legendary career writing the Requiem for the American Dream. He was a philosopher, statesman, freedom fighter and rock star of the highest order, and America will be a shabbier and weaker place now that he is gone.

It wasn’t about Drugs and Drug-Concepts, and it wasn’t about the Guns, though both are of course crucial to his Art & Philosophy. It was about Independence. Hunter believed Americans had the unviolable right to live Independently, to crank it all the way over – as they saw fit and according to their own rules. Early on, he understood that this Main Principle was under constant assault – by the Greedy & Lying, by Controlfreaks on the Left and Right, by Fascist Leaders, by Twits and Hucksters, by the Weak & Dumb, by Those With No Shame. He saw Americans Too Cowardly & Confused to stick up for the Freedom that was their Birthright. His work was the chronicle of the Wretchedness of Unrestrained Power and America hurtling off the Proud Highway.

America is and was and has always been full of mealy-mouth writers and soul-sucks who apologize and equivocate to Power & Ideology. Hunter Thompson will stand as the Writer of his time who saw the Horror and did not Deny and did not Flinch. Who saw that America was Dying, but that it was still hella Funny. Who was Bold and Strong Enough to be Heard.

The precision-jackhammer attack of the Miami Dolphins stomped the balls off the Minnesota Vikings today by stomping and hammering with one precise jack-thrust after another up the middle, mixed with pinpoint-precision passes into the flat and numerous hammer-jack stops around both ends….

One toke over the line, sweet Jesus.

thanks to dougie gyro + illustration by john shakespeare + woody creek + ken layne did write a great obit + and is a new papa, congrats