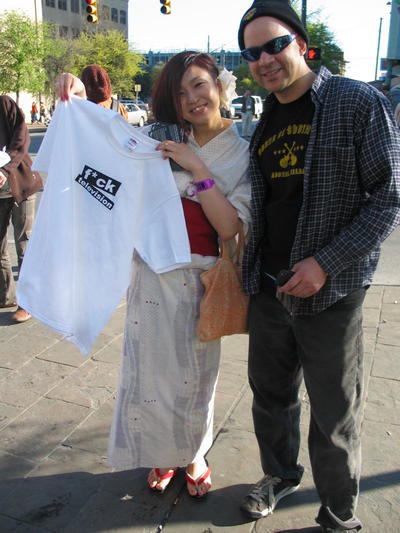 posting the deal below until today so let me assure you that i havent already gone out tonight.

indeed my plans tonight are to meet up with ms melting dolls, princess mcintosh who is ripping up main street with people so big that it would not be prudent to name them until tomorrow when the shit has completely hit the fans.

so lets recap what happened today before this blog turns into pumpkins and rodents.

woke up this morning and got myself a beer. the futures uncertain and the end is always near. pardon me. woke up this morning and celebrated robert blake’s aquittal with a beverage and some second hand smoke from the ladies next door who were complaining that all these big flabby dudes were out there chickenhawking next to the pool or else they would happily enjoy some of this sunshine that capital city was finally getting.

so we commiserated and at noon sk smith picked me up and we went down a very nice street full of cute little shops and restaurants and etc. went to a famous boot store and suddenly i wanted cowboy boots and cowboy shirts and yes, even a stetson. somehow we resisted and moseyed over to a taco bar.

you always know youre in the right place if mc brown is there. half way through my fish taco who appeared but the mighty rapmaster and his lovely lady. we politely said hi bye and headed downtown to see tsar at the hard rock.

heres the problem with the record industry: its full of industry people. here you have 1,200 bands playing over 4-5 days in a great town. everywhere you go there are bands rocking. the art gallery next to the taco place had lou barlow playing in the parkinglot. elvis costello cant get on stage until midnight. the donnas are forced to play at a bbq joint. the stones werent even invited.

so here you have Tsar. the worlds best newly-signed band. and what does their new label do as a “showcase”? they lock anyone out who hasnt pre-arranged a way onto the guest list. yes there were free beers and margueritas and dudes with trays of cheese poppers and chicken bits but what about the passerbys? what about the kids?

tsar took the stage and ripped through their set. halfway through whalen looked up and said, “ten? we have ten more songs to play? oh ten minutes? we have ten minutes to play? no. yes? no. yes? youre kidding right?” and then played 22 minutes of the fastest hardest rock that austin has heard in hours. and it was so good that it made one of the industry ladies shut her fucking mouth for nearly one full minute.

then we walked down the street and every bar had a band and every car had a band and every curb had a band and every pole was advertising a band so sk took me to a swanky old timey hotel bar and a young guy was playing classy piano and we sat on a couch upolstered with cowhide and we sipped our st paddys drinks and we toasted to the fact that 15 years ago jeanine and i fell in love. and before we could finish our drinks a band had taken over the bar and were far too loud so we left.

i must say that i didnt find them too loud and i didnt think the drinks were bad and every time i explained to my host why i was being so tolerant i reminded her that i went to uc isla vista where every drink tasted delicious even if it was kool aid and mouthwash and every band sounded great even if they were painfully out of tune. that years of bad drinks and bad music had all blurred into one swirly haze that all sounded and tasted the same: awesome. and when i die and go to heaven it will look and sound a whole lot like austin where every step you hear something nice, see something nice or smell something nice.

in heaven of course you will be able to eat the tires right off the cars but thats pretty much the only thing that you cant do right now.

sk is sharp as a tack and for some reason the men arent hitting on her, which is odd because there arent that many super hot chicks roaming the streets. in fact if you plan on coming to sxsw to get laid youre better off thinking of a plan b. anyway sk has a biting sense of humor and at some point she started cracking jokes involving jello shots so we found three cops asking a passed out visitor if he was ok and we asked them if they knew any nearby bars that served jello shots and they laughed and we laughed and the drunken man awoke for just long enough to laugh and then one of the cops said as a matter of fact this here bar right there serves jello shots so we went in and the waitress laughed at our order and said shed check to see if they had any

and i yelled, “get some green ones” since its st paddys and all and she said she’d do what she could. and sure enough she returned with two jello shots and then two more appeared and two more and soon enough we were swapping bill cosby jokes and noshing on garlic fries. good times.

and now we are getting ready to possibly see spoon play and sk has freshly showered and i havent freshly done jack shit except of course written to you, and tomorrow i will fly home in the early morn and arrive in LA in the afternoon and my lil texas spring break will be overwith and ive gotta say it was so much different and so much better than i had expected and i have to of course thank my host ms smith and her cat named monkey and all the southern hospitality that everyone has given me.

i will come back to sxsw next year and the year after if all goes well because this is a magical town full of great bands and endless booze and good food and good people. it isnt true what they say about red states. not all of it. some parts of that red isnt so red and sometimes life isnt just one thing. sometimes its many things.

i wanna make a tshirt that says 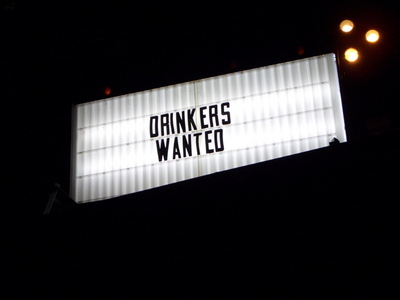 fish dont even drink this much cuz they’ll have to keep running behind the coral to wizz, but i dont care. its isla vista representing in this shit.

i do love austin and tonight the deputy met sk and her pals and i at the gingerman downtown and for having 1200 bands this place sure has enough bars to make it seem like there are only 12 bands in town. we drank pitchers of texas beer and then i dipped into the Spaten.

around the second pitcher these british soccer wearing jersey guys came up to us pretending that they were the fbi. i was all, i can trump that with my xbi password but im on vacation so do your thing limey. turns out they were just kidding and drunk and obnoxious and dumb. the deputy distracted them and me and sk and her friends kept yapping. good kids all of them. suprisingly every single one of them was from harvard.

so i kept drinking. karisa has taught me quite a few things but one thing i learned from her is that i truly can drink. and im a good drunk. i got up and put some quarters in the jukebox. jimmy smith, VU, elvis costello, stones, etc

got back to the booth and the brits had invaded the booth next to us as well. two cigar smoking yuppies. after our third pitcher the deputy turns to me and says wanna see a fight? and sure enough the locals are holding their cigars and the drunken slobby brits are driving them out of the bar. and then they drank their beer and slobbered over the girls we were with.

“aye whose this we have here?” pointing at sk’s half asian friend. “is her name princess?” he asked.

i said i wasnt sure, that i was new in town. that names were for far more advanced creatures. that women were property anyway and i just numbered females. etc.

“then who is this lass?” and he pointed at sk and i said that her name was juanita because i love that name.

and i was glad that they had made the frat boys run off with stogies in hand and soon we were headed across the street and down a few blocks to a new place, a better place, a brighter place, a place with a fireplace and a country band who was tuning up right next to us.

unless of course its a really good fiddle player who’s warming up next to him.

austin has been a delight. a capital d delight. too many bars the way santa barbara had too many beaches.

tomorrow at noon soundrack of our lives will play and then at two thirty tsar will give this town the rock enema that its so yearning.

ive been drinking and i could drink some more but the only thing i look forward to more than the pleasant sleep that i will have is eating my leftover ribs that are waiting for me in the suite.

i heart you austin texas and i know you heart me back.