no other than anna kournikova came over to my house last night and the bitch wouldnt leave. it was like lets make up and be friends again and i was all ewwww you have ricky martin germs or whoever that gaydude is.

she was like hes not ricky martin, as if.

the cd that i listened to the most this year was tsar’s band girls money.

and in honor of them and to bring good luck to my trip i will rock blog it right now an invention i just created.

what you do is put on the cd and start blogging and dont stop till its over.

the dual guitar attack is what rock n roll is about. modern day rock. maybe in the olden days it was the twinkling piano but we’re in the post punk post metal post-alternative netherlands right now unsure of who we are or what we’re doing or who is the mightiest rock band of all

next on my mix after the title track is I Wanna Get Dead which proclaims early “i got a lot a photographs of people i hate” and later “its hard to take a stand with all the women on your lap”. could be the best pop song of the year and i believe i hear a champaigne cork pop.

im going to get in the car in about a half hour and drive to san francisco with a banjo on my knee.

wanna get shot to hell, wanna get dead

up up down down

next on my mix is the epic Wrong which is my favorite song on the album. thats how you should make cds by the way. start off with both barrells, which in this case was band girls money, then follow with something with a quick start like Wanna Get Dead and then comes your best hitter who can go long, wrong.

“did the system lift your star too high.”

ive done most of my packing and the good thing about driving is you can just load up the trunk with ridiculous items like ipod alarm clock radio. 500 cds. four different jackets. cans of beefaroni. four pairs of shoes. a loaf of bread.

everybody’s fault but mine bats cleanup. its ominious bass opening creeps you out and that riff returns and the kids arent making riffs like this out there in the top 40 and you really should reward people who do this. its not easy.

fine her name wasnt anna kournikova but i started calling her that because i wanted her to leave but she wouldnt leave and i kept saying to myselef are you crazy youre demanding that this gorgeous girl get away from you but dude i had to pack!

i paid my rent in case i was trapped up there in a snowdrift and told the old lady that the housesitter didnt speak english.

star time bats fifth to show off how deep this lineup is. people asked me about the fact that its “only” 37 minutes long. and i never told them this but i wanted to say to each of them, id rather have a solid 37 minutes than 20 minutes of quality and 40 minutes of filler. 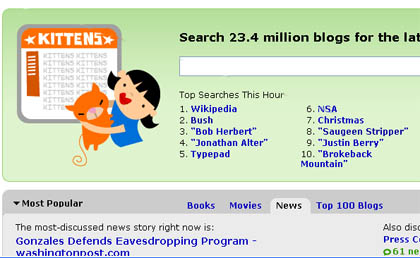 tsar doesnt have any filler.

my brothers are all proud rockers.

to the left you have leah face from vacant.cc who ive been reading for a very long time so its an honor to see her reading stiff which was a huge success and i want to thank everyone who got it.

all of the autographed ones sold out fast but the unsigned ones are still on sale at the busblog store.

conqueror worm is a weird space song about a worm.

when people ask you about ’05 tell them that bush admitted to spying on america and tsar wrote a song about a worm that ends so beautifully you cant even believe it.

which is then followed by Straight which makes this a great record all of a sudden.

ive got a chemical smile, im a moustashe man.

people say theyre straight but they bend like a hook.

what? i mean what? can you really say that? and this is where the dual guitar attack gets you. nobody has this. and a real guitar solo thats really two guitar solos. then the break down and then the return. the glorious return.

the return of rock.

listen to those seven songs for seven days in that order, and i promise you that you’ll hear the return of rock.

hell in 1999 i was looking for a little action, dropping out of school and working for the xbi.

next up batting ninth if you can believe it is tsars new single love explosion. i talked with jeff after the troubador show and he told me that the video for love explosion is exactly what hes always wanted, so i cant wait to see it.

i wonder who will play the horns in the video?

which lets us finish the cd with the matt welch co-written you cant always want what you get, and again where are you hearing this sort of guitar these days? its the return of rock. and when you add those seven songs with kathy fong, destoyers, i dont wanna break up and teen wizards you dont even need you and jim, which is why tsar hasnt really played that one much, which is shocking since it was their closer for years.

ok so thats rockblogging rock stars. as the horns of this song send us out i wanna send shoutouts to mark in frisco who i will drink with tonight at the 500 club and jessica from elgin roots who i will party with and her two friends from chicago. and i hope the rain doesnt get me before i get there so im out.

yesterday that you may have missed out on.

The first was an AP story that confirmed that even though the singer of Weezer has sucessfully completed his two-year bid at celebacy, and is half way through his third year, he is not close to ending his fast.

The 35-year-old frontman earlier vowed to remain celibate for two years. Although that deadline expired six months ago, Cuomo still doesn’t expect to jump back in the sack anytime soon.

“It’s been two-and-a-half years now, actually,” Cuomo tells Blender magazine in its new issue, on newsstands Tuesday. “The vow is over, but I wanted to keep cruising.”

Though he’s a lead singer for a popular rock band, the bespectacled Cuomo says it’s not difficult to manage restraint.

“Abstinence doesn’t require as much self-discipline anymore,” he says. “We never had any serious groupies, anyway. Our generation got screwed.”

and then in yesterday’s Harvard Crimson, the bespeckled emo king listed his top 20 songs of the year:

“Because Of You,” “Behind These Hazel Eyes,” and “Since You’ve Been Gone”—Kelly Clarkson

Weezer is currently on tour in Japan where they are also filming a live DVD.