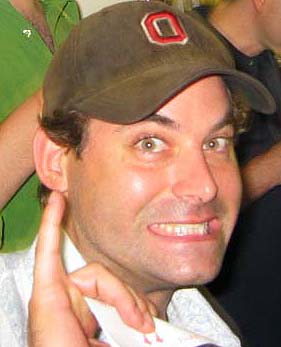 he’s been a pappy for a little while, but i just realized that hes one. some things have a way of not sinking in.

os was born on a bayou in owensburough kentucky with a straw hat on his head.

most people dont know this but his first trip to the mississippi was when he was in the marching band.

it had just snowed.

the bus driver didnt pull over for any stops for hours and os had been drinking one capri sun after the other.

when the busdriver finally pulled over to get directions os didnt run to the bathroom like the other boys.

even then he played things cool.

and zipped up leaving the girls amazed and the bank steaming.

without him the busblog wouldnt be around.

his servers have kept this blog up pretty much 24/7, which is always a jinx because any time i say that something happens, so if it does blame me.

im a huge fan of this show. i paid $40 for the live feeds. but ive found that thats not even enough, that im grateful to those who take the best parts and put them on youtube.

because i have somewhat of a life theres no way that i would have seen a lot of the clips that are on there. plus, i seriously doubt that i would have chosen this camera to follow will and boogie into their dark chilltown bedroom.

and no, i cant believe i get laid either.

our darling jeanine moved to buelton to film sideways 2 and because she misses LA she has been down here twice in three weeks and last night we went to the wiltern and saw the raconteurs and it was entirely delightful.

i write a lot about some of my xgirlfriends and i dont know why i dont write more about jeanine, we’ve always been very close and pretty much gotten along perfectly for a very long time.

after the show, she came back to my house to tune my guitar and teach me a power chord and i gave her a book and this afternoon she called to tell me that she read it in two hours she loved it so much. dan fantes chump change. fucking love dan fante. i hear his pappy wrote some too, but i havent read any.

anyways only jeanine could cut half of her hair off and look even better. i shoulda taken some pictures but i dont even have pics of jack white or billy gibbons.

at the show i also saw alecia from looklook with her dude sitting on one of the plush staircases at the wiltern as jeanine and i were walking up to the upstairs bar. i miss looklook. looklook was the first hint that the Lord wanted me to know that being laid off from E! was the first step on a beautiful path of a better future. much love to looklook.

something about living up in beulton has totally mellowed jeanine out and im telling you she looks super good. she befriended like twenty people all around us as we were rocking out to the bands. it was funny. we decided that shes going to help me throw all my crap out of my house and redecorate my bedroom. like do something for example with the twenty pillows, as well as the bicycle that is currently an excellent pants hanger.

yesterday me and the pants went to the apple store and the dude did a few things to my iPod and he said do you mind if you lose everything thats on here and i said nope, and then basically threw it over his shoulder, snapped his fingers and poof a new one appeared and he gave it to me.

i said is that it?

and i just got done uploading 50 gigs into it and you have to admit, these are pretty sweet times when you can upload 50 gigs of anything into something the size of a deck of cards.

however it is mighty troubling how prone to fuckups these iPods are.