Mike: what were you for Halloween?

contrary to public belief im an extremely shy person. i fake it pretty well, but deep down all i want to do is be in my house in my pajamas with one or two cheerleaders and a reliable high speed connection. i like to stay under the radar, especially in public. i know thats the opposite to everything that my online presence would have you believe, but i never expected any of this, within a month after i started this blog it was successful and had i known that was going to be the case i wouldnt have hosted it on tonypierce.com. i like my privacy. i prefer to blend into the crowd. thus i dont really like wearing costumes or flashy clothes – in public.

however when young ashley todd blackened her own eye, carved a backwards b in her face and claimed that she was beaten and robbed by a 6’4″ black man because she was supporting the straight mcpalin express i saw one of the easiest costumes ever. and if theres one thing i like when choosing halloween garb its ease.

sadly in this photo you cant see the b on my left cheek (which should learn me for putting it on the wrong cheek), but most of the people who “got” who i was praised me, however several people had no idea who i was and either shunned me for being a republican-backer or bought me a beer. now its my plan to find a new way to wear my only wig each halloween since now ive worn it twice.

The WordSlinger: What are the top three Rock Band/Guitar Hero World Tour songs that you would sing/play guitar/play drums to until you five starred all of them? They don’t have to be songs already available–I’m talking your wish list here.

drums are the hardest part of all that video game stuff. they say that people who are good guitarists suck at guitar hero. i must be a great drummer in real life cuz i always break the foot pedal and fail miserably at the game. with that said i would love to try out the AC/DC Live rock band disc especially For Those About to Rock. metalica’s One is a classic as is maiden’s Number of the Beast. all hail rock band and guitar hero for teaching the kids what real rock sounds like.

Sharp: In your trick-or-treat bag, what candy would you search for to enjoy first? What candy sits around for a long time after Halloween?

im eating M&Ms right now (dont tell karisa), but im also a big fan of milky ways and three muskateers, so thank god for the Fun Sizes of all of those. im not a huge fan of things with honey or coconut. the d-o double g is a stone pimp yo. the lbc doesnt play. also, often hes not talking about women when he says bitches aint sh but hos and tricks. he is calling his adversaries those names. although you and i might see calling a man a woman disrespectful to women, in the rap world it’s quite common. i understand its common in other worlds too. but yes i agree it is kinda mean. they probably shouldnt have wronged mr. dogg.

*bluenun: what do you think are the top 3 inventions of the past 5 years?

the iphone rules like no other, if only because it is an excellent phone first and foremost. its insane that it took so long to get an actual cell phone to work, but here we are. all the other stuff on it kicks butt too.

just as hard to get is the nintendo wii. i dont use the wii fit as much as i should but its incredible. any product that is sold out for two years straight should tell you something about how good it is. if it were a witch it would be set on fire for being so magical.

and finally, i love the Slingbox. for a guy like me who travels so much, it’s so great to be able to keep up with my stories via my Tivo right from my laptop.

Sarah: Why are black men so good in bed?

timmay!!!!!: what will frances farmer’s revenge on seattle be?

little known fact: it was because of her that the Supersonics were sent to Oklahoma. kurdt, once again, was a prophet. jon: what does it take to get your vote? will there be any printed newspapers left five years from now?

i was in college when Bill Clinton, Barbara Boxer and Diane Feinstein all won. i wrote them all letters of congratulations and told them that if they sent me back an autographed photo or if they created legistlation that would provide free condoms and AIDS testing in every large shopping mall i would vote for them every time. the new president replied with an autographed photo. the women ignored me and have never received another vote from this busblogger.

yes there will be printed newspapers 5 years from now. no there wont be as many pages in them as in 1982, duh, but thats not newspapers fault. people consume their news much differently today than they did 25 years ago, and advertisers have multitudes of different ways to hock their wares. but yes, there are people who enjoy newsprint, large pages, and having their information delivered to their doorsteps for pennies a day.

Ali: Out of all the Hershey’s minis that you find on this day, which one is your favorite? God help you if you don’t say Krackel.

i think theres something wrong with me because all of those little chocolates taste exactly the same to me. but since you dont want me to say Krackel i will say Hershey Dark. Mike: do they really mean it when they say “do not take with alcohol?” because i don’t know if i can go another 10 days sober…

i am not a doctor, but ive always considered that label a dare. bottoms up, mikey.

zona: did you ever egg a car or teepee a house on halloween?

i was the only black kid in the neighborhood. ok, me and my sister were the only ones. that meant i needed to keep my nose clean, as it were, cuz if someone ever said “WHO THE HELL EGGED MY HOUSE!” itd be real easy to say, if i had done it, “the black kid!” also, my mom didnt like us wasting food or TP. however, i was pretty gifted at ding-dong ditch.

anonymous emailer: this is too personal to put in the comments; but there’s nothing i wouldn’t tell the blogfather. a family tragedy has left me without any blogging inspiration. what is next for my 3+ year old blog? i have sporadically kept a stash of material going, so it’s not like i’ve given up totally. i just can’t get going again.

clearly theres something deeply wrong with me because it sounds, to me, that you have not only a great reason to blog, but some really interesting feelings to work with. if it is embarrassing, or if part of your readership includes members of your family, perhaps you should consider a private blogspot blog. but if you have truly been blogging for years now, you shouldnt stop, you should blog right through it. you might be surprised at how liberating it is to get your feelings out there. you might be pleasantly shocked at what treasure awaits you when you open up and let go and speak right from the heart about this tragedy in a blog. once you tackle the serious stuff it will also let you have some space to write about the less serious stuff on your original blog. good luck!

is better than the last three Radioheads

but people pretend and pretend.

what i love about canada is they care abooot our elections almost as much as we do.

so for sass‘s bday, auntie raymi took her vibrating kitty, washed it off, and put it in her mouth for our entertainment

i sorta feel bad that i dont even know which queen won the last canadian election, but the next time i go up there maybe someone will give me the 511 (which is the 411 in canadah) 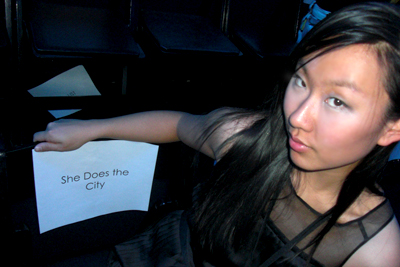 it’s also draft day for the busblog 3 yahoo fantasy hoops league. we draft at noon today (sunday). we have 9 teams and need 9 more