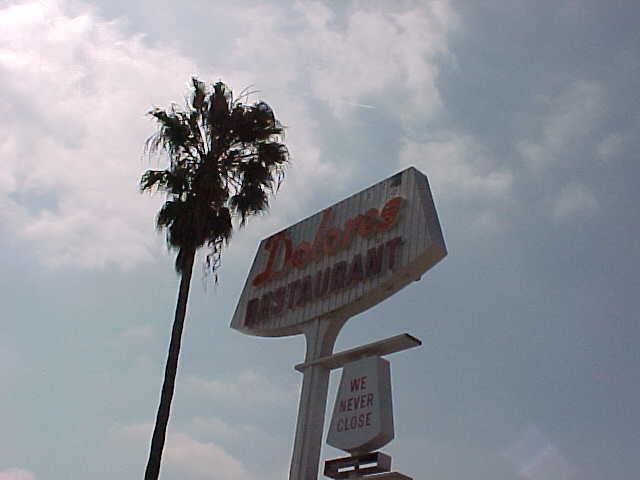 occassionally wed have breakfast at the end of our block at the 24 hour diner Dolores.

afterwards id say why did we just spend $20 on eggs and bacon?

and in a perfect example of time heals all wounds (or distorts the truth), last night we were planning on having dinner and seeing a movie.

unfortunately there was a bloggy emergency at the lat and we werent able to leave the house until 9:30pm. and as much as i love LA, i gotta give it up to NYC for being able to have a nice meal at pretty much any hour. same cant be said for the 323.

so as we drove down sunset i said, how about Dolores – you could get breakfast… who doesnt like breakfast for dinner?

as we made it to the 405 i was thinking about liver and bacon. when we got to dolores in west la, we immedately noticed how they had redecorated the place. still looked like a 60s denny’s-esque diner, but they had painted the walls yellow-orange and put up all these framed posters and shelve-filler that it looked like a furniture store, except with tables.

the food appeared to have gone through an anti-flavor machine. my salmon ($16.75) looked like fish vampire had sunk its fangs into the small portions and sucked all the life out of it.

even the mashed potatoes felt like they had just suffered a heart attack.

our waitress was great and she told us that the new owners had done the redecorating about a year ago and there was still a little left to do. we were happy that they hadnt messed with the extra large muffins.

but we hope the next renovation will be with the menu.