bc anyone can rightfully quote the original Hangover movie and ask, but did you die?

weirdly if you asked Daniel Johnston that tonight at the reception party beyond the Pearly Gates he would smile and say yep.

i don’t know if this is how it is with everyone, but the basis of most of my bad days revolves around Communication

did that person say to me what i think they did? why isn’t this other person understanding what i want and my expectations and how small they are and yet they are still not being met?

i admit that sometimes, especially when it comes to jobs, i feel that at my age and station i have done the things necessary to be Qualified

and when a gig appears that suits me perfectly, the hiring manager would either piss his pants and say THE tony pierce wants some of this so shout heck yeah!

but youd be shocked how few times thats happened lately.

what good is experience if you’re gonna overlook it?

and i keep saying, God has something better. be patient, grasshopper. this endless chorus of nos is going to end in a bukakke of Meg Ryan when harry met sally yes yes 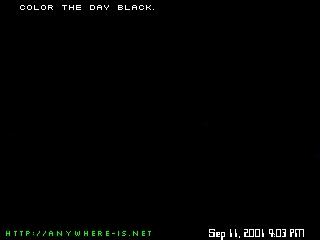 it wasnt a live streaming cam show like it eventually became,

most of these people would just snap a still image from their web cam and have that update on the blog.

usually it was a little box, like the picture above.

i had done photo essays using some of their cam stills in the past when talking about halloween or when one of the cam girls was signing off forever, so i knew to just go on the web and let the pictures tell the story.

one of the little stories that this photo essay captures was that sometime on the day of 9/11 there became this buzz that everyone needs to donate blood. why that? weren’t all the people dead? i dont remember what the hoopla was about, but it was there.

the busblog started a month before 9/11. its fascinating and unbelievable to think about what has happened in my life since that day – all the joy and pain and huge successes.

which is why its equally mindblowing that a city like new york hasn’t totally rebuilt ground zero by now, and its totally disappointing that a country like the usa hasnt been able to get osama by now.

the reward for getting osama is $27 million. but maybe it should be something else. somethng like how the Make a Wish foundation works. clearly $27 million isnt enough, so maybe offer something priceless: like a weekend as a guest at the playboy mansion, followed by a trip into space on the space shuttle.

theres nothing worse than unfinished business.

sometimes i think about osama bin laden and i think if he was alive he’d be saying ha ha america via his audio tape or video tape. but then i think pretending hes dead is just naive. like elivs hes alive. if not in body, definitely in spirit.

there are ugly holes where glory once stood. there are literal scars in our largest city. seven years later we have lost more than buildings and a few thousand innocent americans. we’ve lost more than i have ever experienced during my lifetime.

and by we, i mean pretty much the whole globe. if new york city and the pentagon arent safe, in broad daylight, then who or what is safe?

osama, if hes alive, appears safe. we wont even go into pakistan to “hunt him down”. we blew up mosques in iraq, whats so holy about pakistan?

every year i obsess over this day and all that comes up are more questions. and really, what answers have come about since 9/11/07? have we learned nothing new? have our tax dollars really gone for nothing in a year, in two years, in three? what has the torture, the extradition, the waterboarding, the domestic spying, the international spying, the wars, the money, the “intelligence” gotten us in the last few years? every 9/11 they should tell us.

in life, at work, at play, on tv, every now and then you might say “you know what, something sure seems fishy here. someone really isnt telling me something.” after 7 years they should start telling us stuff.

and im a peaceful man, but if dude is really in pakistan, and if we know it, and if pakistan wont let us in, if indeed they are protecting and harboring the alleged mastermind behind all of what we think of when we think of this infamous date, then i say they open up the draft.

one where you can sign up for however long as you want to be over there. sorta like how radiohead charged whatever you wanted to pay for their new record. draft for as long as you can take it.

and you go to boot camp, you learn all the things you have to learn, you get in shape, and you get flown over to the border of pakistan. you and the probably 5 million other yous that want to find this guy and like you were willing to join the temporary draft.

and then on that certain date, everyone bum rushes pakistan and all 5 million start doing their thing. and i bet you one of two things happen. someone either turns him over or we find him in no time because if i go to hunt bin laden during a war, im warring. im pissed im not in LA, im pissed its been more than 7 years. im pissed but im focused. and ive come screaming for vengeance.

and i bet there are fellow likeminded folk like me.

but for some reason it seems like the decision makers of this country are perfectly content not to go where the real evil is. and that confuses me and makes me distrust. and when you distrust your own, then maybe evil has prevailed.

and that doesnt feel so great either.