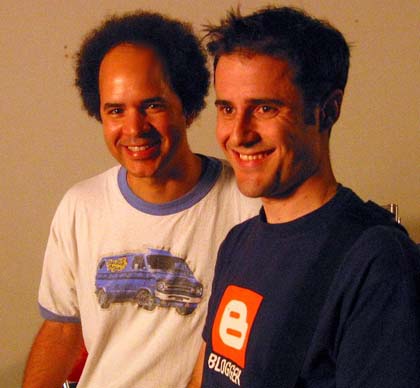 he soon started up Odeo where my podcasts live. the following is from a year ago with some updates

ev williams, the creator of Blogger today stepped down as head honcho, he announced on his blog this evening.

with nothing to do but rule the world.

“Necessarily, I must express that it’s been an amazing, thrilling, life-changing, difficult, rewarding, surprising, and lucky ride I’ve been on,” the thirtysomething san franciscan posted on his popular blog evhead.

“And ‘life-changing’ is such an understatement,” he continued. “As I said on Blogger’s fifth birthday, for doing the ‘same thing’ for five years, it’s amazing how drastically my life has changed. Not just my life, but me. I’m just a simple farm boy from Nebraska, after all.”

a simple farm boy who some might now call

the most eligible unemployed bachelor in america. [Ed. im told this line is false]

and a headhunters dream.

ev revolutionized the internet by creating one of the web’s first killer aps.

not only was it free, easy to use, and instantly popular,

but it created a global community where the billionares, the homeless, and average people inbetween could all have an equal voice

regardless of what they had to say.

today the president of the web based software company responsible for you reading this explained why he stepped down in a 1250 word light-hearted upbeat friendly post titled “Next?”

under the headline of “Are you pissed at Google and/or are they removing you?” ev wrote the following:

People often want to imagine a conflict. And, I guess if you consider how often acquisitions go horribly, it’s not entirely unreasonable to assume. Unfortunately — I mean fortunately — I can’t help fuel any “Google acquires company, kicks out founder” headlines. Google management pretty much let my team and I retain control of Blogger since we got there. For better or for worse, they trusted that we knew what we were doing and attempted to support it without screwing it up. There are always new issues to deal with when you trade your old ones in. But, all in all, they’ve been awesome. And leaving was entirely my decision. They even offered that I could start something else within the company, if I wanted.

The reason I’m leaving probably comes down to personality more than anything. I’ve just always been stubbornly independent-minded — even when it wasn’t necessarily in my best interest. I hated school. I dropped out of college (never believing I needed a degree because I wasn’t going to work for anyone anyway). I started two or three companies (depending on what you call a “company”) before starting Pyra. (Let’s just call them “great learning experiences.”) I only ever had one real job, and it lasted just a few months, though it was at another cool company (O’Reilly).

When I started at Google, I knew I was giving up my independence and knew I probably wouldn’t like that eventually. So I promised myself I’d stay at least a year. I stayed for a year and eight months and have had a fun, fascinating, and extremely educational time. I’m honored to have been a part of Google for such a historic period.

If I was going to work for anyone, I’d work for Google. It’s, basically, just not in my nature.

when i first heard the news not long after it was posted, i looked on my buddy list to see if there were any blogger insiders online

there was one who was about to post his feelings about ev’s announcement, which he said they knew was coming any day.

him: it’s all good though

me: shit
me: when i was at a dot com, they said, there are builders and there are maintainers
me: i guess ev is a builder, for reals

Last week’s cover of the ny times magazine of two gray haired old media writers looking over the shoulder of sassy ana marie cox as she types up her blog wonkette on a laptop was just as symbolic as literal. blogs have even the playing field even among pro journalists.

The Bloggers On The Bus was a feature story about the inclusion of bloggers at both of the major political conventions this summer.

on the same day on the west coast, the Los Angeles Times ran a long op-ed from a successful political blogger who warned of the soon-to-be “commercialized senility” of that circle’s blogs.

indeed, if the la times has begun to count the days until youve sold out,

and when you’ve made it

continually showing us how it’s done.

Ev and I locked horns on more than one occasion during the time I oversaw the business/strategic end of LiveJournal. The most divisive time was when Blogger was nominated for a Webby Award back in 2001, and LJ — the upstart not-quite-ready-for-prime-time weblog app and choice of angsty teens — challenged Blogger as a write-in candidate. 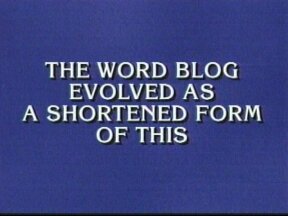 We were smaller than Blogger, but got the People’s Choice award because of our community features which gave us an advantage on word-of-mouth. Ev and I met briefly at the Webbies. It was a big to-do in San Francisco’s opera house back then, with Sam Donaldson and Alan Cumming as emcees… but it was also the dying days of the dotcom exuberance. Dotcom kids dressed up, schmoozing, with comp’ed champaigne, because someone with a lot more money was willing to pay for it all. Larry and Sergei from Google came in for their award on roller skates and flapping cloaks.

There would be no grand opera house in the coming years, as the dotcom era dried up, and unfortunately there were few kind words shared at the time. So, yeah, there was a rivalry, and even some hard feelings… but only because we all cared about what we were doing.

That said, look at the results of competition. You can get a weblog/journal for free nowadays from dozens of different sources, with software that is easy to interface with, that you can interface with numerous third-party applications, with code which is either open or highly modifiable more often than not, and syndication which is standard.

What started out as a bunch of kids competing over meaningless baubles as a matter of pride turned into a growing, interconnected, user-friendly, generous marketplace of ideas.

So, in the end, no single weblog application won the war. We all did.

Nicely played, Ev. (We should all do it again someday!)

and if i might be able to add my two cents…

ev’s creation has given me the ability to reach thousands of people a day, and a few times ive reached millions.

through blogger i have met amazing people and received remarkable gifts.

as someone who once thought he didnt need a blog since he had a perfectly good website, let me say that FrontPage never got me laid.

and for that i have always been grateful of ev and his team.

a few of whom wrote a few things themselves.

was a fella named ev who sold his three and a half year old company, Blogger, to Google and got to announce it live from the blogoshpere in a packed crowd of hipsters and nerds in an overflow event on a sidestreet in Chinatown.

wanna know how cool ev is?

motherfucker’s sitting three chairs over from me, theres hundreds of people looking at him, but they are slightly distracted by another member of the panel who’s discussing the world of blogging. the attention comes back to Ev and he says, “oh, can someone put my blog on the screen again please, im sorry.”

fucker had gotten a call on his cellphone, but, being the gentleman didn’t answer it. instead, he checked his email via the wireless network that was in the building, updated his blog live and linked to the silconvalley.com column that broke the story that Google was buying Pyra Labs, the San Fransisco company behind Blogger.

and then he told us.

everyone cheered, as Ev was answering what was announced to be the last question of the two hour discussion that included Doc Searls, Heather from the Rabbit blog, Boing Boing’s founder Mark Frauenfelder, the Reverse Cowgirl Susannah Breslin, and yours truly who didn’t say fuck even once.

that’s the only reason that i can figure that the los angeles times reporter who was assigned to cover the Live from the Blogoshpere story chose to interview me directly after the incredibly wonderful event, instead of talking to the only person in the house who has suddenly become a millionaire and a validated success right before our eyes.

while looking reportedly so cute that my ex, chris, and my laywer giggled the whole night and snapped picture after picture of him and blushed and covered their mouths with their hands.

It was the coolest culmination and synchronicity, wirelessness, and instantaneous publishing.

why is that quote on the busblog and not in today’s sunday la times? and why isn’t it on latimes.com?

la times got to read Dan Gilmore’s scoop before it even went to press! they were in the house! the story was there. the founder of the company was there. lots of other sources were there too. i would imagine that the la times had a camera and were taking pictures of the event, including when the founder made his grand announcement on this, his first trip to Los Angeles.

“see what happens when you come to LA,” i shouted in the microphone a few seconds after he broke the news to us all.

if you want to know why Google bought Blogger look no further than this very story.

Still, because no major news source other than the SJ Mercury (who Gilmore writes for) has published the story, Google’s (beta) News page only ranks it as the number 2 result, even though it’s own data says that the Merc’s story is fresher than the link that is getting the #1 return.

The value of Blogger to Google is, if Google had a faster access to blogs, it would have seen all the activity (above) pointing to Gilmore’s blog, and to the Merc article, and to Ev’s page and would have basically figured out that it’s news.

Right now, even though the humans running it know that it’s news, their own computers don’t even know that it is happening.

So what’s the LA Times’ excuse?

And so was MC Brown who takes wonderful pictures, except when theyre of me.

Thanks to Michael August Pusateri who took a great picture of me (above, speaking on the panel) feeling on top of the world, stoked to finally meet so many people who i admire and who’s blogs i read.

Thanks to everyone who were nice enough to come up and said hi to me, thanks to the nice ladies who invited me to speak with such excellent and smart adults, and thanks for my pals for eating slippery shrimp before and getting drunk with me after.

It was a night i wont soon forget.