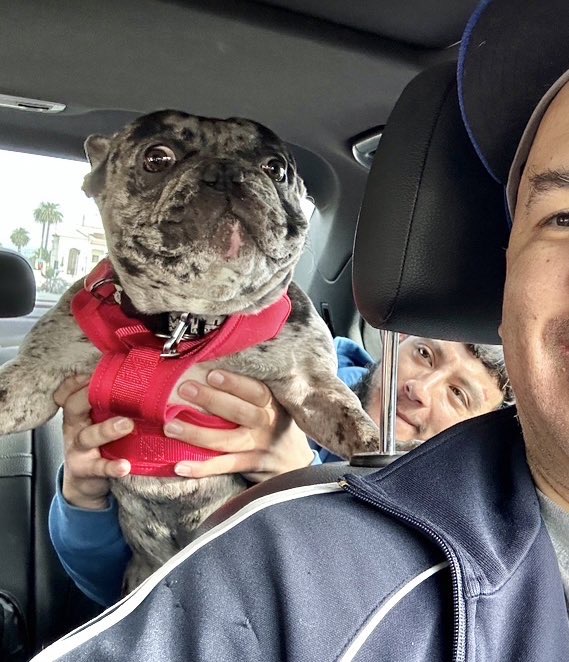 as my uncle, rip, would say, “he was Black as night.”
picked him up at the Southeast LAPD station. two miles from Watts. so, yes, the Hood, as I would say.
why was i in the Hood picking up someone at the police station at 9am? the cool answer is: bc danger is my middle name.
sadly my middle name is hugh and the actual answer is: if you drop off a passenger at LAX at 8am, it’s quicksand all around there. you want to go north to Santa Monica or Venice or lord help you Brentwood, because all of those areas are surging bc all those people are going to work via uber.
and even though those places look close on the map, after 7:30 they may as well be in milwaukee. the traffic is so bad you’ll be lucky if you even get to the 405 let alone traverse. tra-goodluck.
so i went east down Century through Inglewood. stopped off at burger king bc their croissanwich is underrated and sometimes they’ll over do it with the bacon, which’ll kill you, but lol no one thinks of death in the hood. youve never been more alive.
did a ride or two and kept heading east in part because these are all streets, not freeways. and ppl in the hood are already at work at this hour. streets are calm. then i noticed it was surging in watts.
watts is poor and crime ridden. the average income for the whole household is $25k, which seems impossible, but anythings possible in los angeles.
which is the real reason i accepted the ride from the southeast lapd station to the 77th street station today. it could be a cop, it could be a crook, it could be the mom of a guy who needed to get released and she went to the wrong spot. for all i know it could be the most ballsy graffiti artist of our time who loves tagging ‘hear in la’ on police station walls.
turned out it was a guy Black as night, wearing a covid mask around his chin, and waiting for me as i approached the station.
he ran to my car and got in.
“glad Pookie busted you out,” i said, wearing my mask correctly, over my mouth.
“Pookie?” he asked, and then getting the joke, laughed and said, “fa sho” and laughed.
big guy. handsome. great hair. but it wasn’t done. it was uneven and it made me wonder how long they had him in the holding cell.
he told me he was in a car with two of his buddies and “a female.”
the car belonged to the parents of one of his buddies. let’s call him Dumbshit. Dumbshit is in and out of the System so often, his own father forgot he was no longer in jail, so when he noticed his 2018 Honda Accord was not in front of the apartment, where he left it, he reports it stolen to the cops. turns out his son Dumbshit asked the mom for the keys, which she gave him, and he went out with the boys, and the female.
a few hours after reporting it stolen, the dad asks the mom why she’s cooking so much food. she says, because Dumbshit is home.
when did he get out? the dad asks.
this afternoon. he’s partying with his friends right now and when he comes home i want him to have a little treat.
oh shit, the dad says and calls the cops to unreport the car as being stolen but guess what, Dumbshit, his friend, my passenger and the female were already face down on Figueroa Avenue with cops surrounding them when the dad realized he should never call the LAPD for anything because they seem to drag their feet until they don’t.
and not only didn’t they drag their feet last night, there was a copter above the scene where my dark as night passenger was asking himself what on earth is happening here?!?!
were you scared they were gonna shoot you?
i was positive they were going to shoot me, he said. even though no one was arguing, no one was resisting, no one was refusing to hand over ID. nothing. he knew that because they had been drinking and smoking in the hood with people who look like he does, that makes cops make mistakes sometimes.
just like the dad did
just like i did being at LAX at 8am.
luckily no mistakes were made last night on Fig. so this morning my man was picking up some property the cops had confiscated from him when they searched everyone.
and he thought it was at southeast but it was really 77th so thats where i took him
and the next ride was with this well dressed mexican girl and her multi face tattooed bf and their dog who were going to union station to get on a train to then go on a cruise.
the french bulldog, one year old, weezed the entire trip. i felt so badly for him.
they paid $4,000 for him, she told me.
no tip.