the reason everyone should blog is maybe if everyone blogged we would know when more people are battling things.

and we’re all battling things.

some are fighting more serious things than others and need a little more help.

robin williams was so beloved can you imagine the outpouring of support that he would have had if we had known?

pretty sure lots of people would have also gotten that love.

but the first part of it is we have to know.

life is so very complicated

it’s better that it’s complicated but it can make it so hard.

not everyone can afford a social media wunderkind.

life shouldnt ever be determined by money.

and it should never be ruined by fame.

i can’t help thinking if robin williams was a mid level manager he would have gotten the treatment he needed.

but because he was super famous he thought he had to do something different than everyone else.

but as sting once said, if only you knew how fragile we are.

how to be one of them

if you want those extra 25 years, which some of us believe are the worst 25 years, start with choosing the right friends. if your friends are fat alcoholics with bad attitudes, guess what you will be?

so what are we doing wrong?

because TED rules, this dude tells us about places in the world where people live to 100 – and they live with vigor in those years.

have more than 3 really good friends, treat the elderly with great respect, have weekly nature walks, learn how to chill out, and eat small portions of food till you’re only 80% full… for starters. with all this McRib chatter.

its almost like im cheating on her in some weird way.

little does she know that i am tempted all day in this office by odd foods.

take this bag of chips for example.

youd think a man could dip his hands into a bag of tostidos and pull out a chip. but no. there appears to be some home made brownie / fudge in there looking to sabotage him.

theres also pizza, thai food, cakes, candy jars, cupcakes, and even a damn test kitchen in this building producing all sorts of tasty delectables and leading this sinner into temptation.

i only have one life to live.

but me also want a waist that i dont need a new zip code for.

me also want to fit into my jeans without having to suck it all in first.

me also want to rip off my tear-away warmup pants preceding intimate moments and produce a different reaction than hilarious guffaws.

my heros are harry caray and charles bukoski. they never counted their calories or ran around hollywood in the middle of the night.

theyre also dead. but when they were alive they Lived.

i wanna live while i am alive. i wanna eat drink and be with mary.

i see the men you women date. they dont all look like that guy in the Ab Blaster commercial.

they look like theyve eaten a few brownies hiding out in a Tostidos bag. i think cuz its pretty warm at night, for decemeber

saw these two cops pull over a car and then give me a good look as i ran by.

two people said hi to me.

one person walked past me with his mouth open as far as he could open it.

saw several people dressed up to be out on the town.

and saw a woman who looked like a celebrity, but wasnt.

ran past this house where inside two people were talking

left it on, and went back to the conversation.

ate pie when i got home. 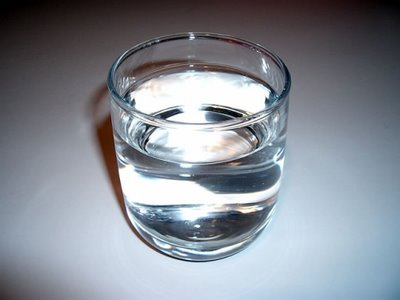 BERKELEY SPRINGS, W.Va. — Their air might bring pollution complaints, but residents of Los Angeles drink the nation’s tastiest tap water, according to the judges of an international competition.

A panel of 10 journalists and food critics sampled sparkling, tap and bottled water from 19 states and other countries, including New Zealand, Romania, Macedonia and the Philippines.

The title of best municipal water was shared by the Metropolitan Water District of Southern California, which serves Los Angeles, and the town of Clearbrook, British Columbia.

Los Angeles won a gold medal in 1998 and has been in the top five in four other competitions since then, according to the competition organizers.

“It means they give special care and attention to their water and how it is processed,” said event producer Jill Klein Rone.

when all my green friends told me that bottled water is bad for the environment because the plastic bottles fill landfills and the gasoline the trucks use to deliver those bottles, etc., i was all, looks like i will go back to beer.

but now it looks like i can kick it old school and just use the faucet or the garden hose again. thanks DWP!

it’s not arthritius, the doc keeps saying it’s tired hands, but it feels like spiders crawling up my arms.

so heres something from the archives of the busblog to tide you over.

ive been at home for two and a half straight days now. this is everything that i always thought i wanted.

ive seen a decent film, i got to eat a spicy pork burrito chips salsa and flaming margueritas, im watching the lakers fight it out in seattle as gary payton returns to key arena without shaq who left in the first quarter, ive had sex with a hot chick (not pictured) with a fuckmepleasenow body.

would it be tacky to count the number of times i had sex this year?

some would say it would jinx it but as a Christian i wouldnt know about jinxes.

im eating apple pie right out of the box. ive been eating like a pig lately.

i dont know where she is right now but it woulda been nice to have her around for some of the day at least.

she left as soon as she had to. it was raining. it was nice. it was nice not to have to worry about waking up. neither of us slept all that great. i held her. she said i had a twitchy moment where i musta been nightmaring. i told her i dont dream. she didnt believe me.

i told her i must have been outofbody spacetraveling through time and dimension.

she said, why would you go and do something like that while we’re all warm and toasty on a rainy thursday night when theres no work on friday?

i said, to fight crime.

she said crime in another world?

i said, yes, and in a different dimension.

then we turned on the radio and had some more sex.

they told me when i was a kid that you hafta watch out for chicks who look good at night but look horrible in the morn. however i have the feeling that it is i who looks like a wreck in the am. my fro goes all over the place, blanket ends up in there, my stubble grows in thick, my eyes have bags, and my rum breath cant be nice.

she looked terrific. btw. so good i asked her if she didnt by accident find herself in the wrong hollywood bungalow last night. i said this to her voluptious and bronzend ass which i couldnt keep my hand offa.

she told me that shes gonna have a hard time finding another man who loves her ass as much as i do.

i told her she needs to stop dating those white dudes in the abecrombie commershes.

the english beat came on the radio. she was just finishing up her period. dont you love these details.

she came out of the bathroom and i had already put the condom on. she slipped under the comforter. we got at it. when we eventually changed positions, turned down the smoke machines, and lowered the harness she looked at my thing and screamed.

am i that bloody? she said. and looked at the sheets and then back at me.

startled i looked down and said what? and then, no silly, this is a red condom, which one of the strobe lights illuminated.

and we went back at it.

and lately i havent given a shit about what the neighbors think.