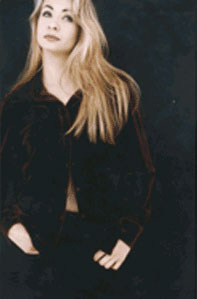 On my last day at work, a bunch of my co-workers informed me that we were going out for a celebratory night of debauchery. Always game for a drinky-poo or two I wasn�t about to become the guest of honor in absentia.

So we end up at this club. We were all dancing when suddenly it was just this girl and me. This is the same girl who was chastised at work for weeks because she informed everyone that she saw a bunch of heesh on her drive from San Diego to San Francisco. Heesh was Jane�s way of indicating that she saw many horses in the same pasture. More than one goose=geese. More than one horse=heesh. It made perfect sense to her.

So she wasn�t the sharpest tack in the box. But she was a lot of fun and the boyz liked her.

The musc is good. The boys were cute and Jane whispers in my ear, �I know how we can get the guys here to REALLY notice us,� and before I know it she�s grinding me. I don�t really care, I�m moving across country in less than a week so I grind her back.

The music gets really loud; in fact I�m sure I have hearing loss from that night in particular. So she whispers in my ear again. It was my bad ear, so I yell into hers, �hang on, let me switch ears, I can�t hear you.� So somewhere after I began turning my head her mouth caught mine. And her tongue winded around my own. I was shocked, excited and intrigued.

We retreated from the dance floor and found a dark corner. I sat on her lap and we felt each other up, and kissed some more. A lot more. It was nice to kiss someone whose lips didn�t cover � of my face. It was delicious to kiss someone who didn�t leave saliva dripping down my chin. And no stubble to give me beard burn.

But it didn�t go any further that night.

Just before I left town she and I and her boyfriend went out. He bought us drinks and kissed me on the dance floor. Incredibly, he was an even better kisser than his girlfriend. After last call we went back to his place and I held Jane while he did his thing to her. �Now you touch her,� he said. So I did.

She was kind of drunk in a silly way and as she lay there she told me how when she was a child her parents had a barnyard full of heesh. �Maybe when you come back west to visit we can go riding.�

When I left that night Jane�s boyfriend kissed me again and said something weird. Jane looked at me and said, �Oh him? Don�t worry about that. He�s just mad because you made me come so fast.�