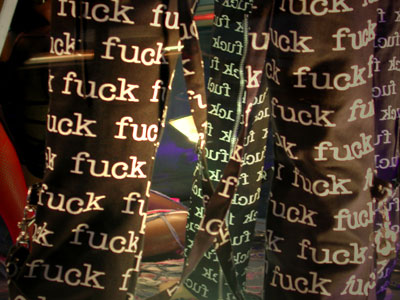 of my dates/times being off by about 8 hours, i bought into Blogger Pro today.

welch and layne and the others moved to moveable type recently and i was almost ready to go until i realized that Blogger is the one program i use nearly every day. and it’s been like that for nearly a day.

didn’t that mean that Ev had won the bet?

isn’t shareware a dare that says, “i bet you that my shit is so good that i can give it away and eventually you’ll pay me for it out of the goodness of your own heart.”

i think it is.

Blogger Pro has some useful features that i cant figure out, but for the most part the $35 was a nice way of me telling Ev and Pyra that i appreciate their invention and they deserve to be billionaires. fuckers started a phenomenon.

if i start a phenomenon and in the end i don’t become a billionaire, i’ll feel robbed.

in the meantime i will settle for the few millions that im sure all of you will just paypal right over.

ashley came over this weekend.

one of her friends had just had dinner with her and graciously dropped her off.

two hot girls over at my house eating strawberries and whipped cream for desert.

earlier in the day a few of the bros invited me over to hollywood park to gamble on the ponies. the last time i went there was in 86 when i lived about a mile away and i needed to turn $40 into $160 real quick. elvis costello was in town and only murray’s tickets had tickets.

first race on saturday i bet $5 on the nose of the 5 horse and i was instanly ahead.

it was free visor day.

third or fourth race i put $5 on a long shot-favorite exacta and hit that too. it was good to buy everyone drinks and coulter a popcorn.

bought the beers from a red vested black bartender with an eyepatch.

all sorts of people at the racetrack. smiled at the blackest girl i ever saw in my life. barely saw her. she had long braids and a white visor. she was there with her three uncles. nobody was talking to her. she just watched. smiled at her again a little later in the day and she smiled back real nice.

ken had me betting on a gray horse. don’t ever do that.

coulter had me betting on the devil horses. don’t do that either. lost on Lil Bit Devilish and lost big on Wicked Britches.

me and ken got into the habit of watching the horses in the paddock before the race, that worked okay, but that’s a big fakeout too. project all you want, the skittish little pony sometimes does run around the track faster than the big black mighty stallion, but a lot of times the medium sized normal brown guy wins when no ones looking.

afterwards we all ate soul food on florence avenue and drank grape soda.

im luckier than you’ll ever know.