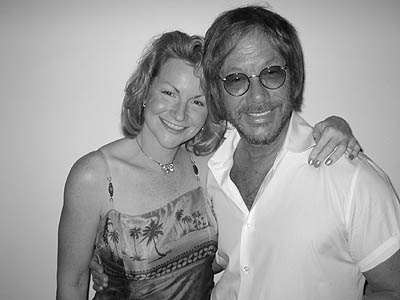 is because none of you would believe it. but last night’s blogger party (#4, i think) had some photographic proof, and several witnesses, so let’s pretend that last night really happened.

my good pal the rallying point picked me up and we drove through hollywood listening to the blasters. even though it was about 830pm, traffic was nuts because there was a blackout near paramount studios. rolling blackout? terrorists? too many LA women all blowdrying their hair at the same time? who knows these days.

well brian probably knows. he certainly knows how to throw a blogger party. the host of the very first LA blogger drinkfest, the den of lion’s producer put together a guest list that included eric and dawn fresh from the sandy beaches of waikiki; charles johnson from lil green footballs; bill quick was in town from frisco so it was a treat to meet the daily pundit; i never had the chance to say hello to doc searls who i didn’t know was from santa barbara; shook the hand of a man who actually gets paid to blog, mickey kaus representing the wesssside; was introduced in person to the original patio pundit – accept no imitations; some guy named warren zevon (pictured, with dawn) who crashed the party despite not having a blog; ann salsisbury proved the fact that no blog party is official without a super cool lawyer in attendance; i talked about the power of Tsar with Brian an associate editor from Reason; and libertarians with brian’s cohort, sara, an assistant editor from Reason, which is the beautiful publication that runs nice pieces from welch.

matt and emmanuelle were there; os and ali were there; ben was there and pulled a coulter on me; a woman with gigantic boobs and no bra was there with a very dark mysterious stranger with long hair and a huge hat; scott rubush showed up only to tell everyone he’s moving to philly cuz the party scene in LA is played out; said bon jour to an enchanting french woman tolerated the ten non-dirty french words i still remember; and not only did i get to meet madison slade but i got to drive her porsche. but more about that in a second.

another party crasher was famed music video director nigel dick who is responsible for g’n’r’s “sweet child o’ mine”, britney’s “baby, one more time,” and several others of hers, and many many many many other vids that you’ve enjoyed. did i ever tell you that my secret dream is to make music videos? i didn’t tell nigel that either.

instead i drank wine with madison who lived on russian hill when i was in the haight, little did we know.

one of the nice parts of not having a car is being able to ask for a ride home from a girl who looks even better in person than on her blog. driving down hollywood blvd looking for a gas station, the quick witted capricorn cruised past two CHP motorcycle cops who were putting on their helmets to bust a different hottie in a volvo. just our luck they pulled her over in the same gas station that we pulled in to. and as i was trying to be a gentleman by holding the gas pump into the sweet targa, cop #2 circled madison and her car as cop #1 “investigated” the miniskirted twentysomething in the four-door.

cop #2 made madison follow his finger and asked her how much she drank that night. she told him two glasses of wine, which is the wrong answer, apparently, and when he got distracted, moxie said, “fuck this, im getting some smokes” and strutted over to the cashier leaving me at the pump with the cop.

i told my man that she really only had two little glasses and i only had one and she was taking me home. he gave me the follow the finger test which i failed at first because those things always crack me up but then i got it together and passed and he said, “if you drive out of here i wont give her the breathalizer, which she would fail.”

i said, two glasses of wine will make you fail?

i said, you’re the boss.

and when the long legged skinny blonde returned she handed me her keys and i drove her to my house in her porsche.

too bad it was 3am or i woulda invited her in.

but i did get her number.

thanks for throwing the bash, brian!