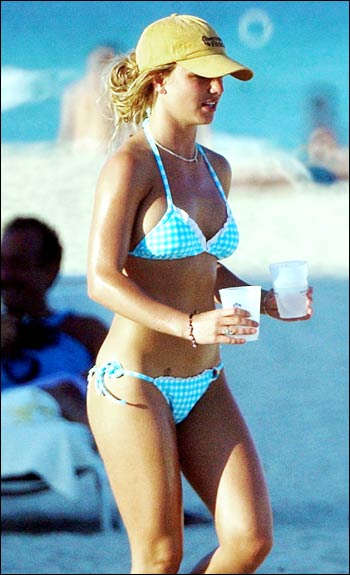 i was lucky enough to see ms. spears this year. i had great seats and i was even inspired enough to come back home and do a photo essay for your ass.

i was disappointed by the lipsynching but i guess i should get over it since nothing is real anymore, it’s all just a beautiful dream and as long as they keep the fluid clean in these pods of ours we can keep believing the grand lie and float around in our ignorant bliss.

nobody really talked to him or asked for an autograph because we don’t really do that in LA which is why the stars like it here, but george seemed to be in such a great mood that he woulda signed anything you handed him, i bet. and i saw the deposit slip right there, and i had a pen, but ive lived here long enough to know that autographs are for the tourists, lets just let george enjoy his trip to the bank.

first motherfucker i ever saw who literally laughed all the way to the bank.

now, for our girl britney.

i think its about over for her.

i don’t see her being able to sustain this frenzy and christina is far sluttier, and the people seem to like that, and britney cant really sing all that well, and shes not much of a dancer.

i say shes in playboy in three years.

people send me fakes of stars all the time. fakes are ok. i can live without them. but a while back when i was doing a little more nudity on these pages in order to drum up a little traffic (it worked) i did some pages like this, but i warn you theres nudity

but mostly i liked that one because it sorta looked like my old editor amy.

anyway, im a christina, anna, and mariah fan. o-dub is all about britney, and he must be in louisianna right now doing the crawl with her because his page is mysteriously barren.

oliver, where are you?