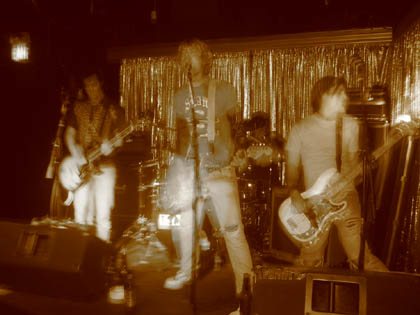 and coulter, drummer of my favorite band, tsar, peered over his sunglasses and said, what sort of secret show is this?

as is normal for lots of bands who want to try out new material without the pressure of appeasing their fans, secret shows are in many cases good ideas. unless the secret gets let out. and all your friends arrive with giddy anticipation.

we were only one marc brown away from capacity when the quartet took the stage poised to unleash a dozen new high powered rock assaults onto the mostly virgin crowd. yes, tsars best friends were there, but most of the audience had no clue.

until it was too late.

ive had a lot of favorite bands over the years: ac/dc, iron maiden, the police, the replacements, led zeppelin, janes addiction, the wonderfuls, thee mystakes, the beastie boys, but never has one of my favorite bands become more aggressive and powerful and spiteful as theyve aged. the key word last night was rock. rock motherfuckers rock.

the hot girls had to back off, even their tattooed boyfriends couldnt get too close to the blast coming from the stage which was furious, friends. there were no ballads. there were no la la las, there was no phone call from the governor.

tsar’s new tunes are thick and mighty and raw and sped up. you feel like you’ve been up all night on crank and a cute girl knocks on your door with some pure shit and your mind melts and you quickly tumble through the rabbit hole only to be greeted by… a trumpet, a gong, a timpani? no its the dual guitar attack of whalen and kern and kern only gets better on lead guitar and whalen wails in approval.

rock, motherfuckers. the kind that even midnight cant harness. a spit in the eye of the dance clubs blocks away with lines around the corner of trendies in their fendis. a poke in the eye at alleged rock radio with their incubus and suckubus and linkin puke and so ons. and a kiss on the cheek to everyone in attendence.

i have the best friends in the world and some of them are in the best band in the galaxy and if you dont believe me then youre wrong.

on the drive home my ears were ringing and the smiles shared between matt emmanuelle and i were big and bright as we sped through the streets that have names but dont matter for tsar had come and rocked our little worlds without even trying very hard. as if they had done it all in second gear. as if theyd done it left handed.

as great as last night was i will be expecting even more when tsar plays a real show on saturday may 17 at spaceland in silverrock.