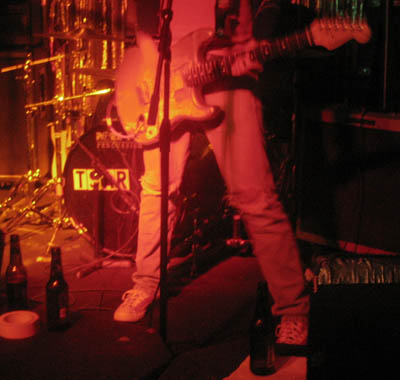 karisa sent me the sweetest, nicest long email. renee called me as soon as i got home. and as i was taking my pre-tsar power nap i was awaken by the soft little knock of clippergirl replete with kneepads and hot pie.

nothing in here is true.

if im depressed, the last place i will corrupt will be this beautiful playground.

mayor richard riordan in one of his interviews about the la newspaper that he wants to form on the backs of my pals ken and matt said that he wanted a paper that would tell the good news as well as the bad.

easiest thing in the world to do, in my opinion, is to spew out negative crap, or find dirt on dirty people. or bitch. or whine. or vent.

yesterday i just didnt want to go to work. i wanted anything other than to have to get up in a copter and seek out the bad in my fair city. even if all i was going to do was rub it out.

sometimes you feel like youre a rat catcher or a cockroach exterminator. someone calls you about a smell and you go to where they smell it and you smell around and you say ah ha theres the rat and you flush it out and then you capture it.

rarely is it pretty. rarely are you happy that you found it. rarely is the mess that theyve been making for months or years enjoyable to dig through.

im the most positive person that i know and it affects me, so you should see how it affects the rest of the guys around here. guys who were never upbeat or optimistic one day last year, or the year before that, or ever.

these are the cast-offs, the unloved, the misfits, the loners. anarchists with guns. criminals who roam the streets undercover chasing other criminals.

but then i get into the office and i have my morning meeting with my team and we joke around and that comraderie makes it worth it all.

and i end up not wanting to be a bum on the 21 looking like george bush whose best slice of luck will be getting a bus transfer twenty five minutes into the ride.

i end up wanting to be the superhero that many of you already are.

then i climb into chopper one, ask the crew to pop in janes addiction idiots rule, turn the engine over, and we’re off.

dont cry for me islavista.

but when i fly over, feel free to show me your tits.